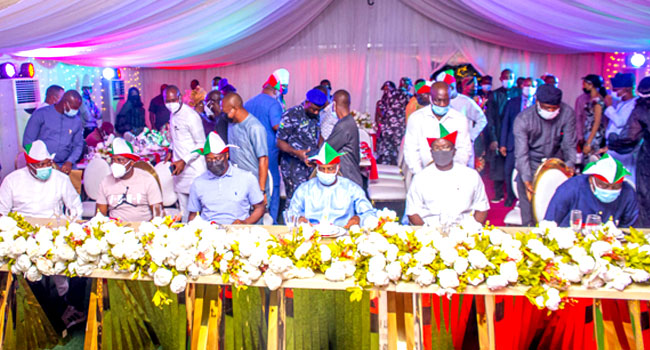 The Peoples Democratic Party (PDP) and its governors’ forum on Saturday said that a decision zoning of political offices would be made by the party at the appropriate time before the party convention, scheduled for Oct. 30.

The party and its governors’ forum stated this in separate statements issued in Abuja on Saturday in reaction to Gov. David Umahi of Ebonyi State’s comment on the issue of zoning of presidency by the PDP ahead of the party national convention.

Umahi had accused the PDP of not ready to zone its 2023 presidential ticket to the south.

The PDP Governors’ Forum (PDP-GF), in a statement by its Director-General, Hon. C.I.D Maduabum, said that the forum was outraged by Umahi, who left PDP for the All Progressives Congress (APC), attempting “to turn truth on its head”.

Maduabum advised Umahi, who he alleged to have sabotaged PDP in the 2019 presidential election in the state, to continue his role in the APC and leave the PDP alone.

On the issue of Zoning, Maduabum advised Umahi to face his issues in the APC and not drag PDP and its Governors into it.

“PDP is an independent political Party with workable structures and method of doing things. It’s not an appendage of the APC or indeed of any other association or group.

“The PDP will take its decision on the issue of zoning political offices at the appropriate time. Even the APC has not taken any decision yet on zoning.

“Different groups and interests are advancing arguments to defend their positions as is required in a democracy. At the end of the day, decisions will be taken by each political party.”

Maduabum said that the PDP was single minded in its resolve to regain power from the APC in 2023 and would craft strategies to achieve same in the national interest and survival of Nigeria’s democracy.

In a separate statement, the PDP National Publicity Secretary, Mr Kola Ologbondiyan, also urged Umahi to focus on his APC and leave the PDP alone.

Ologbondiyan said that Umahi ought to know that the PDP was a party of due process and inclusiveness and that all interests within the PDP would collectively and peacefully take decision on zoning when the time comes.

He said that Umahi was expected to take his agenda on zoning to the APC but he would not do so because he knows that Nigerians would usher in the PDP in 2023.

Umahi had on Friday mocked PDP-GF in the Southern Governors’ Forum who joined in adopting the resolution for power shift to the South, saying their body language shows the party won’t zone the Presidency to the South.

The Southern governors, led by Rotimi Akeredolu of Ondo State, had in a communiqué issued at the end of their meeting in Enugu State on Thursday insisted on power shift to the South.

Umahi, who spoke on a television programme on Friday, alleged that the PDP governors at the meeting in Enugu were being dishonest with their claim that they were keen about the 2023 presidency going to the South.

“The body language of one or two PDP governors suggests that the party is against zoning and I can tell you from reliable sources that they are thinking just for their own interest.

“Let us see what they (PDP) come up with in their zoning in the next few weeks.

“There are a couple of decisions taken at the Southern Governors’ meeting that I know that together, there is sincerity of purpose in them. But when it comes to politics, I see the hand of Esau and the voice of Jacob,” Umahi said in the television programme.