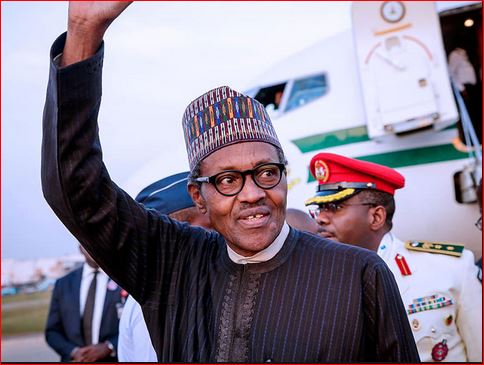 President Muhammadu Buhari has given his blessings to Muhammad Umar Faruk and Maimuna Ahmed Idris, as they were joined in matrimony on Saturday.
Muhammad is the son of Emir of Daura, Alhaji Faruk Umar Faruk while Maimuna is the daughter of the Accountant General of the Federation (AGF), Ahmed Idris.
In a message delivered on his behalf by a delegation to Kano State led by the Minister of Defence, retired Maj.-Gen. Bashir Magashi, Buhari said his sincere blessings and good wishes will remain with the newly-weds.
A statement by the president’s spokesman, Malam Garba Shehu, in Abuja on Saturday, the president prayed for peace, harmony and prosperity in the home of the couple, appreciating their kind invitation.
The Ministers of Water Resources, Sulaiman Adamu; Aviation, Senator Hadi Sirika, and Senior Special Assistant to the President (Media and Publicity), Garba Shehu, were also in the delegation.
Maimuna, the bride, was given out in marriage by Gov. Abdullahi Ganduje of Kano State while the groom, Muhammed Daha, who is also the Dan Buram Daura, was represented by Magajin Garin Daura, Alhaji Musa Umar.
In a homily, the Chief Imam of the Kano Central Mosque, Prof.  Sani Zahraddeen, who contracted the marriage at the Palace of the Emir of Kano, admonished the couple to respect one another and warned the community against mistreatment of women.
sharing is Caring... Please Share