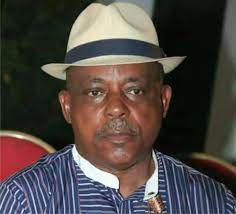 The Peoples Democratic Party (PDP) caucus in the house of representatives has asked Uche Secondus, national chairman of the party, to resign from his position.

The PDP is embroiled in a leadership crisis, which has resulted in some stakeholders leaving the opposition party.

It had been reported that seven deputy national officers of the party resigned last week in protest against what they called “poor leadership.”

However, the board of trustees (BoT) of the PDP last Thursday, set up a committee that includes governors and former ministers, to resolve the crisis.

But it appears the crisis is far from being over as federal lawmakers at the lower legislative chamber elected on the platform of the party have asked the national chairman to resign “immediately”.

According to a statement issued on Sunday and jointly signed by Kingsley Chinda and Chukwuka Onyema, PDP caucus leader and deputy leader respectively, the resolution was reached on Saturday at an online meeting.

The lawmakers accused Secondus of “lax and bedroom managerial attitude” which has resulted in “mass exit from party members”.

The main opposition party lawmakers said Secondus’ stay in office “will do grave injustice to the party and put us in a precarious situation as every hour should matter now”.

“To many, the national chairman seems much more contented with occupying the office and therefore preoccupied with holding onto his position rather than preparing for next elections; this explains for his inexplicably missing endless opportunities that ought to have been utilized for consolidating a viable opposition; skewing party congresses to favour personal future ambition and frustrating genuine party members across states which have resulted in mass exit of party members at the national assembly,” the statement reads.

“There is no clear road map, blue print or policy programme for the PDP by the Chairman, thus the party is allowed to flow with the tide, only showing up with weak press releases once in a while without commensurate sustainable action.

“The lax and bedroom managerial attitude of the Chairman who runs the party from his home and only surfaces in the party office for meetings, coupled with several promises without commensurate action has led to inept management of complaints, despondency amongst members and consequently an exodus of members of the party at all levels, including a member of the Board of Trustee of the party.

“Whilst these misfortunes befell the party and concerned party members are busy trying to stem the tide, the party chairman has carried on as if all is well and does not appear to see the caldron awaiting the party if it continues on that trajectory.

“While the PDP National Chairman, Chief Uche Secondus contributed notably to the party in the past, cogent accusations currently being levelled against his leadership far transcend personal issues as there is an established consistent and persistent pattern of inadequate consultations, even with members of the PDP House Caucus, thereby giving rise to hitherto unspoken feelings of intra-party alienation in several quarters including in his NWC.

“Such has manifested into, or encouraged or fueled the exit of many prominent and highly-experienced party members with many more at the brink of leaving, if nothing is done fast”.

The lawmakers asked Secondus “to consider making the necessary personal sacrifice worthy of a leader in the party’s current and future interest with a firm assurance of honourable regard and appreciation by the party leadership now and in years to come, by honourably resigning his position as party chairman immediately, to allow the party an early start”.

The lawmakers advised the board of trustees (BOT) and governors elected under the party to “ensure immediate and firm resolution of current challenges to enable a re-engineering, re-focusing process that would restore party members and millions of other Nigerians’ hope and confidence in the PDP”.