In an apparent move to block a major source of income of Alhaji Atiku Abubakar who has declared his intention to contest the 2019 presidential election, the Muhammadu Buhari-led administration has directed the Nigerian Ports Authority (NPA) to terminate the boats pilotage monitoring and supervision agreement that the agency has with Intels Nigeria Limited, a company co-owned by the former vice president.

Government says the contract with Intels, a leading integrated logistics and facilities services provider in the maritime and oil and gas logistics sectors of the country, was void ab initio.

Attorney General of the Federation (AGF) and Minister of Justice, Mallam Abubakar Malami (SAN), in a letter dated September 27, 2017 to the Managing Director of the NPA, Ms. Hadiza Bala-Usman, said that the agreement, which has allowed Intels to receive revenue on behalf of NPA for 17 years, violates the Nigerian Constitution, especially in view of the implementation of the Treasury Single Account (TSA) policy of government.

Intels, also co-owned by Mr. Gabriel Volpi, an Italian national who also has Nigerian citizenship, will lose several millions of dollars in the cancelled deal.

In the maritime industry, pilotage is compulsory for all ships of 35 metres overall length or greater unless a valid Pilotage Exemption Certificate is held by the ship’s master.

In return for the service, ship owners/companies are required to pay a pilotage fee, which Intels collects on NPA’s behalf and retains 28 per cent of the revenue as commission for the services rendered.

In the memo obtained by Thisday, Malami stated that the agreement violates Sections 80(1) and 162(1) and (10) of the constitution, and wondered that the parties – NPA and Intels – did not avert their minds to the relevant provisions when they were negotiating the agreement in 2010.

Section 162(1) states: “The Federation shall maintain a special account to be called ‘the Federation Account’ into which shall be paid all revenues collected by the Government of the Federation, except the proceeds from the personal income tax of the personnel of the armed forces of the Federation, the Nigeria Police Force, the Ministry or department of government charged with responsibility for Foreign Affairs and the residents of the Federal Capital Territory, Abuja.”

In the letter titled: “Request for Clarification of Conflict Between Executed Agreement and Federal Government Treasury Single Account Policy,” the attorney general said: “I refer to your letter dated 31st May 2017, ref: MD/17/MF/Vol.XX/583 in respect of the above subject matter wherein you sought clarification on the legal issues implicated by the continuous implementation of the Managing Agent Contract Agreement dated 11th February 2010 executed between the Nigerian Ports Authority (NPA) and Intels Nigeria Limited for the provision of boats pilotage operations, in the light of the Federal Government of Nigeria’s Treasury Singe Account (TSA) policy.

“Upon my review of your letter under reference and the relevant agreements, I have been able to conclude inevitably that the terms of the agreement as agreed by parties and the dynamics of its implementation which permits Intels to receive revenue generated on behalf of NPA ab initio, clearly violates express provisions of Sections 80(1) and 162(1) and (10) of the 1999 Constitution of the Federal Republic of Nigeria, 1999 (as amended). It is thus curious that parties did not avert their minds to the above provisions of the constitution whilst negotiating the agreement.

“The inherent illegality of the agreement as formed has since been expounded by the TSA policy issued by the Head of Service of the Federation on behalf of the Federal Government of Nigeria directing all ministries, departments and agencies to collect payment of all revenues due to the federal government or any of her agencies through the TSA.

“The objective of the presidential directive (TSA policy) in exercise of the executive powers of the president under Section 5 of the 1999 Constitution (as amended) was in furtherance of the spirit and intent of Sections 80 and 162 of the constitution and to aid transparency in government revenue collection and management.

“NPA being an agency of the federal government is bound by the TSA policy and has not howsoever been exempt therefrom. Due to the constitutional nature of the TSA, where there is a conflict between the TSA and the terms of the agreement, the TSA shall prevail.

“Therefore all monies due to the NPA currently being collected by Intels and any other agents/third parties on behalf of NPA must henceforth be paid into the TSA or any of the sub-accounts linked thereto in the Central Bank of Nigeria (information of the account will be communicated in due course) in accordance with the TSA policy.

“For the avoidance of doubt, the agreement for the monitoring and supervision of pilotage districts in the Exclusive Economic Zone of Nigeria on terms inter alia that permits Intels to receive revenue generated in each pilotage district from service boat operations in consideration for 28% of total revenue as commission to Intels is void, being a contract ex facie illegal as formed for permitting Intels to receive federal government revenue contrary to the express provisions of Sections 80(1) and 162(1) and (10) of the 1999 Constitution of the Federal Republic of Nigeria (as amended), which mandates that such revenue must be paid into the Federation Account/Consolidated Revenue Fund.

“In the premise of the above, the conflict between the agreement and the TSA policy presents a force majeure event under the agreement, and NPA should forthwith commence the process of issuing the relevant notices to Intels exiting the agreement which indeed was void ab initio.”

Son of Late Oba of Lagos Sentenced To Death For Murder 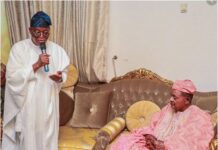