vytorin 10 10 price is there an over the counter augmentin cost at walmart penicillin sold over counter
25.2 C
Lagos
Thursday, June 17, 2021

​A passenger train has caught fire in South Africa after colliding with a truck, killing at least 18 people and injuring 268, rescue workers say.

“I was so traumatised. I didn’t know what to do. I was looking for a door just to jump out. Every door was locked… All of a sudden, we just saw smoke, smoke, smoke,” a survivor said.

The emergency services rushed to the scene and battled the blaze on the train, which had been travelling from the coastal city of Port Elizabeth to the commercial capital, Johannesburg.

Officials fear the number of dead could rise, reports the BBC’s Lebo Diseko from Johannesburg.

Mthuthuzeli Swartz told the BBC that emergency teams were trying to lift the train to see if there was anyone else trapped underneath the wreckage.

Many People Think My Humility Is Pretence -Abass Akande Obesere 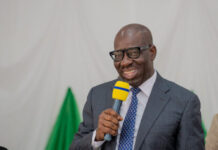