The PDP, a political movement founded by the late General Shehu Musa Yar’ Adua, announced the decision in a communique issued after a meeting in Abuja by its surviving members.

The communique, endorsed by members of the group from the six geopolitical zones, said it was gratifying to note that Atiku, who was one of the founding members of the PDM, emerged as the presidential candidate of the PDP.

Chairman of the PDM, Chief Bode Ajewole, who signed the communique, called on all stakeholders in the electoral process to play by the rules, pleasing that everything possible must be done to make the elections free, fair, credible and peaceful.

Ajewole said, “The tension that has been generated by the 2019 elections is getting to a disturbing proportion and we call on all actors in the electoral process to ensure that peace ensues before, during and after the elections.

“We call on the security operatives to be impartial and to focus on their main mandate of preserving and protecting the lives and property of every Nigerian and foreigners alike. Politicians should refrain from making insidious statements and anyone caught going against this should be duly prosecuted.

“We demand of the Independent National Electoral Commission, (INEC) to comply strictly with the provisions of the relevant laws in its conduct of the upcoming series of elections”.

The group also called on election monitors, observers and voters to conduct themselves peacefully and in a manner that conforms to decent behaviour.

Stating the Atiku has contributed immensely to the growth of democracy in the country, the group continued, “It is noteworthy to point out that even though membership in this political family cuts across all the major political parties in the country.

“It has always been our prayers that one of our own be given the opportunity to showcase our outstanding leadership qualities irrespective of the political parties that throws up such a candidate for as long as he/she is a member of the political family.

“To this end, and with the 2019 presidential election exactly a week away, it has become incumbent on us, as founding members of the Yar’ Adua political family, PDM, to lend our voice to the conversations around the epochal electoral contest.

“We are conscious of our position as proud members of the oldest political organisation in contemporary Nigeria and it is noteworthy to say that this particular election cycle presents itself as a test to the virility of democratic governance in our country”. 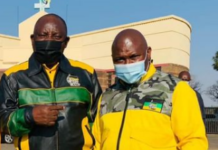 Johannesburg Mayor Dies In Car Accident While Returning From Campaign With...