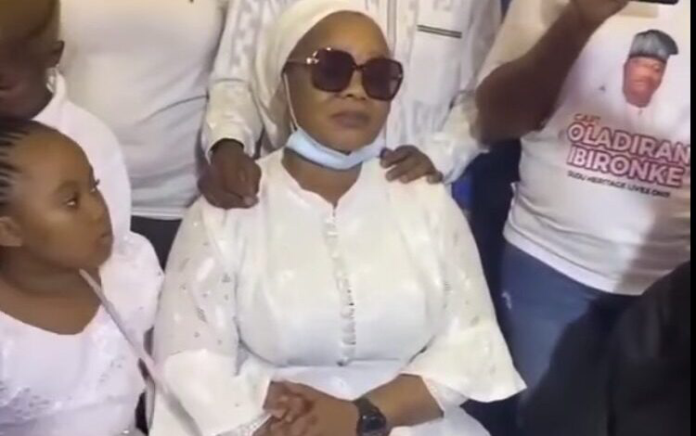 Popular Yoruba actress, Bimbo Oshin-Ibironke, publicly paid an emotional tribute to her late husband, Ola Ibironke a.k.a Dudu Heritage during his funeral service as he was laid to rest on Friday.

The funeral service of late Ola Ibironke, who was also the captain of Ibadan Golf Club held at All Saints Church Jericho, Ibadan and he was later laid to rest at Eternal Home cemetery, Ojoo Area, Ibadan.

Bimbo,who read a tribute to Dudu Heritage described her husband as a gift every woman should have.
Hear her:

“I have cried more than I have done in my 25 years as an actress. It all still looks like a dream to me. With a heavy heart and tears in my eyes, I write this tribute.

“I had the great opportunity and rare privilege of being the wife and partner to the most wonderful loving, romantic, peaceful, kind, and God-fearing man any woman can wish for. Life could not have been a better place without you in it.

“He was the love of my life, the one who did everything humanly possible to protect me, even in the face of all sorts of misconceptions.

He was the only one who understood the true meaning of love. His life taught me unconditional love and kindness. I am grateful that I had the opportunity to share his dreams, Hopes, love, friendship, and much more.

“I flashback to the 12th of September 2021 and am still shattered. I still called you at some minutes to 7 pm when I came to pick our son up at the golf club as directed by you. My instinct told me to call you to come out and see me at the car park. I did call and you said hello iyawo e, ma binu mo wan meeting, meaning Hello my wife, I’m sorry, I’m in a meeting.

“I prayed to God to bring you back to life but alas death snatched you away from me (Iku da mi Loro) A loving and accommodating father to several people tell me a man of noble character and I will present my husband to you My heavenly father used you to bless me with the most amazing and adorable children.

“When our daughter asked, Mummy, where is daddy? I answered her that daddy has gone to be with the Angels and that we will never see you physically again but in our dream. She asked again when is daddy coming back to us?! said he won’t be long.

“My tears refused to stop, if death has a price, I could have paid it. You were my backbone. my rib, we had great plans, we laughed and talked about our old age. You promised to watch over me like a father. As fate would have it you became my dad when I lost my biological father in 2007.

“You were a contented man of humility and integrity, you believe a good name is better than riches, I am “Bimbo Oshin today because of you ,Akande mi Uomo Ajo. You gave me peace of mind while at work. You always put smiles on everyone’s face without any preferential treatment. Your smile lights and melts my heart.

Your laughter is contagious. The swiftness of your departure is still shocking. I keep asking myself ‘how could Ola die just like that?” Dudu why do you have to go? How do we explain this to grandma? O ma se oooo! Who are we to question God?”
Also present at the service was the Dudu Heritage boss’s first wife,Shola,who,sources revealed Bimbo had gone to make peace with before the burial ceremony commenced,hence the reason she was given her space to play her role as a second wife.

Contrary to the belief of many, the late Dudu Heritage boss was still legally married to his first wife who lived abroad. She was well supported by her friends and family,all of who shared in the funeral ankara of the day. Bimbo and her friends also shared in the same ankara.

There’s No Unity In The Family Since My Father Died –... 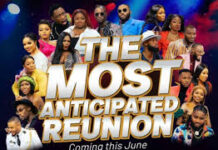 Starbucks secret menu the drinks you didn’t know you can ask...