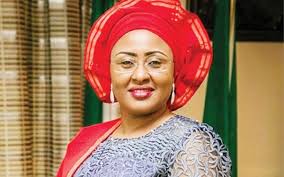 A national leader of the ruling All Progressives Congress, Asiwaju Bola Tinubu, on Thursday said the concerns that the constitution did not recognise the role of First Lady had been “forever laid to rest” by the performance of the wife of the President, Aisha Buhari.

Tinubu said this in his remarks at the public presentation of Aisha’s biography, ‘Aisha Buhari: Being different,’ written by the Senior Special Assistant to the President on Administration and Women Affairs, Dr Hajo Sani.
The event attracted dignitaries across the country including Vice-President Yemi Osinbajo; his wife, Dolapo; Chief of Staff to the President, Prof Ibrahim Gambari, who stood in for President Muhammadu Buhari, state governors, federal lawmakers, ministers and traditional rulers among others.
The APC leader, who is the chairman on the occasion, said, “Given the First Lady’s achievements, no one can reasonably question the role of a First Lady any longer.
“Remember there were those who argued that the constitution does not assign an official role to the First Lady.
“Because of Dr Aisha Buhari, their concerns have been forever laid to rest.
“She has been a voice of conscience calling us to be our better selves for the good of the nation and for the betterment of the weakest, most vulnerable among us.
“As such, she has been a strong pillar of support not only to the President but also to the Nigerian people whom they both serve with such patriotic commitment and high purpose.”
Tinubu recalled that Aisha, because of the humility of the presidential couple,  chose not to be addressed as First Lady at the beginning of this tenure.
This, he said, could, however not be sustained.
He added, “Neither her role nor her individual capabilities could be downplayed very long. Mrs Aisha Buhari has truly shown herself to be the First Lady of Nigeria in title but also by virtue of her talent and temperament.”
Osinbajo, in his remarks, described Aisha as being truly different.
He said the President’s wife remained first First Lady to be on Twitter, Instagram and other social media platforms, getting her unfiltered views across to Nigerians.
He added that she is also the first to receive, in real time, the opinions of Nigerians on her views.
Osinbajo said, “With her views, forthright, crisp, truthful and once in a while controversial, she has established an ongoing conversation with the Nigerian people.”
Dignatries present struggled to outdo one another when it was time to announce their donations.
The representative of Alhaji Aliko Dangote announced a donation of N30m; representatives of Chief Kessington Adebutu and Alhaji Abdulsamad Rabiu donated N25m each; representatives of Alhaji Muhammadu Indimi and Captain Idahosa Okunbo donated N20m each; while Mrs Bola Shagaya and the representatives of Arthur Eze donated N10m each.
Representatives of Daisy Danjuma and Folorunsho Alakija also made donations without announcing the figures.
sharing is Caring... Please Share