The session, which afforded the tribunal opportunity to meet the parties with a view of setting up modalities to be adopted in the actual hearing of substantive issues in dispute, ended on Friday as trial is set to commence on June 10, 2019, the adjourned date.

The tribunal was adjourned till May 31 for submission of Schedules of Electoral Forms and INEC Adhoc Staff Reports for Essien Udim, Ini, Abak and Obot Akara Local Government Areas.

On resumption of hearing, Barr. Emukpoeru who represented INEC, sought the tribunal’s consent to tender

4. Certified true copies of documents for collation at LGA level for Essien Udim.

8. Certification of compliance with section 84 of the evidence act with a smart card reader report and accreditation from polling units.

9. Regulations of guidelines for conduct of the election.

10. Schedule of polling units for ward 10 in Ini LGA as captured in EC40G.

He also announced that the pre-hearing report would be presented on the adjourned date.

The tribunal adjourned to Monday, June 10, 2019 for commencement of the trial proper. 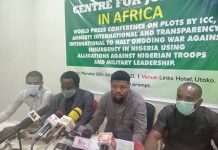