The Economic and Financial Crimes Commission (EFCC) on Tuesday November 17, 2020 presented its 6th witness in the ongoing trial of a former Governor of Zamfara State, Mahmoud Aliyu Shinkafi and others before Justice Fatima Aminu of the Federal High Court Gusau, Zamfara State.

The witness, Tasiu Abubakar, an operative of the Commission, was led in evidence by prosecution counsel, Musa Isah.
In his evidence, Abubakar revealed that he first came in contact with the defendants sometime in May 2016 when the Kano Zonal Office of the Commission received an investigation briefing from Headquarters alleging that  a former minister of petroleum resources Diezani Alison-Madueke had warehoused the sum of ($115,000,000) One Hundred and Fifteen Million Dollars in a new generation bank and that same were distributed for 2015 general election.
Abubakar added that “we therefore commenced investigation and it was discovered that the third defendant Aminu Ahmed Nahuche, fourth defendant Ibrahim Mallaha (who is now late) signed and collected the sum N450,000,000 (Four Hundred and Fifty Million Naira) from Gusau Branch of Fidelity Bank and took same to the house of the first defendant, Ambassador Bashir Yuguda who revealed to us how the money was shared for the PDP presidential election in 2015.”
The witness further revealed how he obtained the statements of the second defendant Mahmoud Aliyu Shinkafi on three occasions.
“I can recall on the 19th and  23rd of May 2016, I witnessed and cautioned the second defendant and his statement was obtained. On 21 June 2016 I also witnessed and cautioned the second defendant and his statement was also recorded.”
Prosecution counsel, Isah presented the statements to the witness  who identified the documents as they had his signature.
Consequently, Isah sought to tender the statements, but counsel representing the second defendant, Musa I. Labaran objected to the admissibility of the statements taken on 23rd of May and 21st of June 2016. He argued that the said statements were obtained under duress and urged the court to order a Trial within Trial.
Prosecution counsel did not oppose the application.
During the trial within trial, the witness disclosed that the statement of 23rd of May, 2016 was obtained after the second defendant met with the first defendant who helped him recall how he collected the money from him (1st defendant) in March 2015.
Regarding the statement of 21st June, 2016 the witness revealed that, after the second defendant’s statement of May 23rd, 2016, the second defendant left and later came back on the 21st of June, 2016 with a bank draft for the sum of (N6,000,000) Six Million Naira only in favor of the EFCC recovery account. And as matter of procedure, he had to make a statement affirming that he brought the draft.
Abubakar further informed the court that the statements in question were obtained voluntarily .
Asked when the second defendant was released by the Commission, Abubakar said he could not remember, that the information is in the case file.
Counsel for the second defendant applied that the prosecution provide him with the case file to find out when his client was released.
After argument between parties, Justice Aminu ordered that the prosecution provide the second defendant with the case file and adjourned the matter to 12th and 13th January, 2021 for continuation of trial.
It will be recalled that at the last adjourned date, the trial could not go on because of the demise of 4th defendant, Ibrahim Mallaha.
At the resumed hearing on Tuesday, prosecution counsel informed the court the he had been served with the death certificate of the 4th defendant and  applied that the name of the 4th defendant be removed from the charge, which was granted by Justice Aminu.
sharing is Caring... Please Share 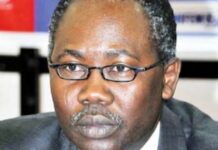