A decision that startled many people especially People’s Democratic Party (PDP) members from her constituency, A key member of the opposition Peoples Democratic Party (PDP) in Lagos State, Remi Adiukwu, has jumped ship.
Adiukwu, who was once a governorship aspirant under the party has pitched her tent with the ruling All Progressives Congress (APC).
She defected on Wednesday with some of her followers at a ceremony held at the Owoseni Primary School Complex in Oshodi.
Adiukwu, a former commissioner in the state said that her defection was motivated by the sterling performance of Gov. Akinwunmi Ambode and the foundation of the ruling party.

“I am back in the party, when I say I am back, I am actively back. I am enlightened now.
“Election is coming, we will do it with all our strength to deliver back to the party all the slots and mandates we took from APC to PDP during the 2015 election.

” PDP is now dead in this council, no more opposition. This council is completely for APC now. I pledge my loyalty.

“My sojourn away from the party was based on principle just as my return today is encouraged today by the same principle of supporting only good things that will be beneficial to Lagos,” she said.

The Chairman of APC in Oshodi Local Government, Olamide Kasali said that the ruling party knew the weight of the defector and the challenge she gave the party in 2015 elections.

“She is the bedrock of opposition in the council,” Kasali said as he presented APC flag to the defector.

According to him, with Adiukwu’s defection the fear of APC during elections has gone as the development marks an end to the opposition in the council.
The Executive Chairman, Oshodi LG, Bolaji Muse-Ariyo said that the defection would make things easier for the council during elections as he presented a broom, the APC symbol to Adiukwu.
Presenting the Party’s Constitution to the defector,  Olusola Sokunle, representing Oshodi/Isolo Constituency I in the Lagos State House of Assembly said that Mrs Adiukwu was behind his election to the House in 2015.

“I am happy because the PDP stalwart we are accepting today into the APC happens to be my political mother. I was not happy that she was still in PDP when I moved to APC.
” This development has cancelled the existence of other political parties in Oshodi LG. Now that Chief Mrs Remi Adiukwu is with us, there is no more opposition in Oshodi LG,” Sokunle said.
According to Sokunle, who has also defected from PDP to APC in the House, without Adiukwu, he will not be in the House as a lawmaker representing the constituency.
Sogunle presenting the party’s Cpnstitution to Adiukwu
Adiukwu has been involved in national politics since the 2nd Republic.
She first contested for governorship seat in Lagos in 1992 under the platform of National Republic Convention (NRC) in Lagos State but lost to the former governor of the state, Micheal Otedola.
After the return of democratic rule in 1999, she joined the PDP as one of the founding members and contested for the governorship seat in 2003.
She served as the Lagos State Commissioner for Local Government and Chieftaincy Affairs during the second term of Bola Ahmed Tinubu, after decamping from the PDP to join the Alliance for Democracy (AD). 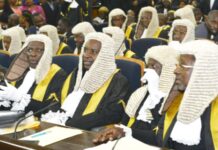 72 Senior Lawyers Elevated To SAN Rank [Full list] …To Be...