how much is nuvaring with insurance fish doxycycline near me price of abilify how long will 5ml of latisse last cost of adderall generic
24.2 C
Lagos
Monday, June 21, 2021

Following the statement blistering attack launched yesterday by the Peoples Democratic Party (PDP) presidential candidate Atiku Abubakar where he wrote President Muhammadu Buhari not to blame the “system” for what he called his failure to fight corruption.
APC’s National Publicity Secretary Lanre Issa-Onilu sparked Atiku for his letter . He urged the PDP presidential candidate to tell Nigerians why they should elect him rather than dissipate energy on the ruling party and its presidential candidate.

Atiku wrote to the President, commending him, “for admitting that he failed in fighting corruption.”

And just immediately the All Progressives Congress  (APC) responded in an equally derisive tone,  smacking Atiku for not facing his campaign and exhibiting “signs of depression”.

In a letter titled: “President Buhari, don’t blame the Nigerian system for your failure”, the former vice president faulted Buhari for blaming his “failure to tackle corruption head-on: on the system.

The letter, dated, yesterday, reads: “My attention has been drawn to a statement by President Muhammadu Buhari on the occasion of a Christmas homage paid on him by members of the Federal Capital Territory Community in which he blamed his inability to fight corruption on the Nigerian system.

“According to the President, his administration is slow in fighting corruption because the system is slow.

“My immediate response to this is to commend President Buhari for admitting that he has failed in fighting corruption. The President has just corroborated Transparency International, whose latest Corruption Perception Index shows that Nigeria is more corrupt today than it was under the previous administration, having moved 12 places backwards in the CPI, from 136 in 2014 to 148 this year.”

Atiku said his point of departure was in the President blaming his failure on the system.

He said: “I disagree. The system has challenges, yes, but where there is political will, the system can make progress.”

Recalling his tenure as vice president between 1999 and 2007, Atiku said: “We used that same system to speedily convict no less a personality than an Inspector-General of Police, and several others, including cabinet ministers and other high officials.

“Mr. President, the problem with your anti-corruption war is not the system. You are the problem!

“The system allows you to arrest, try and convict your former Secretary to the Government of the Federation (SGF), who was fingered in a major corruption case, but you chose to let him go scot free and you demonstrated your tolerance for his corruption by giving him a prominent role in your re-election campaign and recently welcoming him to the Presidential Villa with open arms.

“The system allowed you to arrest, try and convict Abdulrasheed Maina, the biggest-ever alleged thief in our civil service history, who is suspected of looting the pensions of millions of aged Nigerians.

“Yet, you chose not to go that route, preferring instead to recall him, reinstate and double promote him while giving him armed guards to move about.

“The system allows you to probe the $25 billion NNPC contracts awarded without due process, but you chose to bury the matter under the carpet, hoping the Nigerian people will forget about that grand scale alleged looting exposed by a leaked memo from a member of your cabinet.

“Finally, nothing in the system stops you from telling Nigerians who owns the billions found in an Ikoyi apartment.

“Based on the above statement of facts, I will not allow you to make Nigeria the scapegoat for your failure. Your failure is personal, and not national.”

Atiku faulted the President for allegedly branding Nigerian youths as lazy while defending a governor who was allegedly caught on camera receiving bribes.

Atiku went on: “The system did not stop the EFCC from charging the opposition Governor of Akwa-Ibom, Mr. Udom Emmanuel, as a co-accused in the case involving the NBA Chairman, Mr Paul Usoro (SAN). Contrast this with the treatment meted out to Governor Umar Ganduje of the ruling All Progressive Congress.”

Issa-Onilu said: “The PDP presidential candidate, Alhaji Atiku Abubakar, is exhibiting early signs of depression, resulting from obvious frustration. Consequently, he is unable to focus on his campaign. Otherwise, he should tell Nigerians why a discredited person like him should be elected as president instead of raising puerile allegations daily.

“President Buhari and APC, not his programmes for the country, appear to be his main campaign issues. Nigerians are desirous of a campaign that focuses on issues that matter to them.

“For Atiku and his PDP co-travellers, the only interest is to grab power and continue where they stopped in their avarice. The APC administration is eager to showcase the impressive achievements we have recorded in the last three and half years. This is the campaign that matters to us and this is what Nigerians are interested in.

“The trajectory is exciting as we see a brighter future shaping up. We won’t yield to the PDP’s shenanigans. The obvious strategy of the PDP is to truncate the country’s journey towards economic buoyancy and social stability. We will not play the PDP’s game. PDP is acting an anti-people’s script.

“President Buhari remains unshaken by the desperate efforts being made by Atiku and the PDP to blackmail the APC government. Everyone who was involved in corrupt practices would be brought to justice.  PDP is not offering any alternative to the progressive course this government is pursuing.

“It is actually apparent that the party is not contesting the 2019 elections to redeem itself, least of doing any good for the country, but simply to seize power to escape justice for the grevious crimes committed against the people of this country. Nigerians won’t be fooled by the rapacious PDP gang. Never 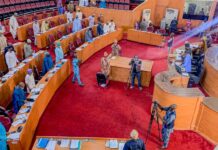 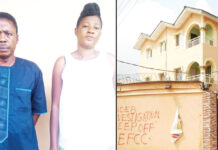