Ondo State Governor, Rotimi Akeredolu has been suspended by the All Progressives Congress for anti party activities.

The suspension is coming after the National Working Committee of the ruling party had queried the governor on March 1 for the offence which the  party believed  affected the chances of  APC in Ondo State during the  last general elections.

The National Publicity Secretary of the party, Lanre Isa-Onilu on Saturday confirmed the suspension, adding that the query has been sent to the governor based on the directive of the NWC.

Akeredolu’s suspension make it the third state governor to be suspended from the party following similar allegations  levelled against his Ogun State counter part, Ibikunle Amosun and Governor Rochas Okorocha of Imo State,

Onilu in his words said:  “Yes, the governor has been suspended by the NWC.

“After the election, we want to build and not to destroy the house.

But we want to do the needful.

“Since we suspended the Imo and Ogun states governors, we want to treat them the same way.

“We have suspended them but they need to defend themselves, It is like a query and a suspension. They have to advance reasons why they did what they did.

“Some people grumbled that why will three people commit similar infraction and we will suspend only two.

That was what brought about the suspension of the Ondo State governor.”

When contacted on Friday, the party’s spokesman simply said “no comment.”

The party had earlier suspended Amosun, Okorocha, the Minister of Niger Delta Affairs, Usani Uguru, and the Director-General of the Voice of Nigeria, Osita Okechukwu, for alleged anti-party activities.

One of the Governor Akeredolu’s aide while reacting to the  issue said the governor never got a query from the party, adding  that they only read of it in the papers and they cannot respond to such query not sent to the governor. 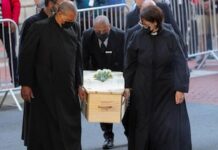 South Africa’s Anti-Apartheid Veteran, Tutu, To Be Laid To Rest In...