A frequently raised objection against Christian engagement with politics is that anything besides explicit preaching and teaching of the Bible is a distraction from the mission of the church. But, to a clerical intellect like Apostle Johnson Suleman, this is a limited understanding of the kingdom of God and contrary to examples in Scripture.

Thus far, the Edo State, Nigerian born pastor’s innovative and sustained contributions at the societal level, suggests the Christian worldview provides a comprehensive understanding of reality, as he grasps at every opportunity available to speak to all areas of life, including political engagement. Of course, he is not drifted, for the Bible speaks about civil government and provides examples of faithful engagement.

Between when he held the last two day ‘Open Heavens’ crusade in Dublin Ireland on Tuesday 9th and Wednesday 10th of July, 2019,  Suleman aired his views on vital national issues, underlining reasons Christians have a duty to care about politics, in particular.

It is relevant to note that Apostle Suleman is not just a preaching pastor; he is also a working pastor. He is an entrepreneur, an owner of high-potential businesses that provide jobs and contribute to economic growth. Outside the church podium, Suleman runs vast business enterprises in real estate, oil and gas, banking, media, mining, hospitality. This places him in good stead to speak on politics and policies of government because he is in the league of people, the entrepreneurs, who make creative leaps to help the government solve problems, unemployment being a major one.

Suleman, who is the president of the Omega Fire Ministries (OFM) worldwide, recently on his social media handles, did speak on a number of issues affecting the polity. Though his views are focused primarily on security, they are holistic messages with implications for all areas of life, including how Christians engage the political process.

Apostle Suleman shared deep thoughts on the government-initiated but suspended Rural Gracing Area (RUGA) initiative, the attacks by herdsmen on communities outside their geographical regions, the reported Islamization agenda by the government of the day, the high taxation narrative, and more. The servant of God stressed an instance when his church suffered victim of the herdsmen’s impunity. He told how his church headquarters in Auchi was invaded by four wandering Fulani herders who were arrested by church members but were reportedly made to escape from the police custody the next day.

Government derives its authority from God, to promote good and restrain evil. This mandate is expressly stated in the Holy Book, Romans 13:1-7. In Apostle Suleman’s words, good government encourages an environment conducive for people living peaceably, whereas bad government fosters unrest and instability.

As he moves the next two-day ‘Open Heavens’ conference to London on Tuesday, July 30, 2019, the firebrand minister of God maintains that Christian leaders must be resolute against the political challenge in Nigeria and elsewhere, as withdrawal opens a moral vacuum liable to influence political leaders to move outside the scope of righteous governing assigned to them. Therefore, because of what the Bible teaches and the inevitability of its effect on people’s beliefs, Christians must care about politics.

I built an app that does triangulation of points on the... 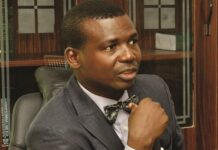