Barely two days after his declaration to dump All Progressive Congress (APC) for his former party, Peoples Democratic Party (PDP) former Vice President  Atiku’s we gathered has seized major organs of this once  Africa biggest party.

His return immediately raised apprehension among some PDP chieftains following indications that he was taking over the structures of the party with his support for the party’s leading national chairmanship candidate, Prince Uche Secondus.

Meanwhile, rumours suggesting that former President Goodluck Jonathan was himself set to compete with Atiku for the 2019 presidential ticket were yesterday, dismissed by his spokesman, who affirmed that Jonathan was a principal figure in the permutations that led to the zoning of the Presidency to the North and national chairman to the South.

Atiku in a live declaration on facebook, particularly chided the APC for failing in its campaign promise to create three million jobs annually, saying the ruling APC has rather supervised the loss of three million jobs under three years.

Atiku’s return to the PDP was immediately welcomed by the deputy president of the Senate, Senator Ike Ekweremadu and Chief Bode George, the party’s erstwhile deputy national chairman and national chairmanship aspirant. In the speech, Atiku harped on the problem of unemployment, noting how he had through his personal businesses and during his stewardship as vice-president, promoted the creation of jobs. In the address, Atiku said his businesses would not in any way interfere with his determination to serve the nation.

Following the facebook presentation, the former vice-president drew questions from his facebook audience. He said: “I have found in my travels across the country that whenever I get into conversations with young people, their number one concern is whether they will be able to get a job, for without a job they have no means of sustaining themselves or begin a family. “Without the security of a job, we cannot have security in our country.  So, without jobs, there is no future for you or for Nigeria.

I also know as a parent that the older generation is also concerned about jobs for their children and, too often today, for themselves as well. “Creating jobs is something I know about as I have created over 50,000 direct jobs and 250,000 indirect jobs in my own state of Adamawa. And I also know how the government can help create the right environment for businesses to create jobs.

“When I was Vice President in 1999, I was responsible for liberalising the telecomms sector which enabled us to increase the number of people who could access a phone from less than 1 million then to over 100 million today. “This transformation resulted in the creation of hundreds of thousands of new jobs from the top-up card vendors you see on every street corner to the many new businesses that feed off the mobile phone revolution. Why I left PDP — Atiku “Some of you may know that I was elected Vice President under the banner of the PDP, which is the political party I had helped to found some 10 years before. “Some of you may also know that I left the PDP four years ago when I believed it was no longer aligned to the principles of equity, democracy and social justice upon which we had founded it. “I joined the APC as I had hoped it would be the new force that would help improve life for our people and I was excited about the party’s manifesto to create 3 million new jobs a year. “The result has not been the change people had been promised or voted for, as in the last two years, almost 3 million Nigerians have lost their jobs.  And today, with a record 25% of people aged 18-25 unemployed, I can see how difficult it is for our youths to find a job. The key to creating jobs is a strong economy and that is what we are currently lacking. “So, today, I want to let you know that I am returning home to the PDP as the issues that led me to leave it have now been resolved and it is clear that the APC has let the Nigerian people, and especially our young people, down.”

However, Former military president, Gen Ibrahim Babangida (rtd), yesterday warned moneybags waiting in the wings to sway the Peoples Democratic Party (PDP) delegates in favour of the highest bidder at its forthcoming national convention to keep off, saying the office of the party’s national chairman is not for sale.

This is coming just as former Vice President Atiku Abubakar has formally announced his return to the opposition PDP.

Announcing his return to the PDP fold via Facebook, Atiku said his decision to rejoin the party followed series of consultations he had with party leaders and stakeholders from across the country.

Babangida who is fondly called IBB by his admirers warned against money-induced electoral process ahead of Saturday’s PDP elective convention holding in Abuja.

According to him, the party needs a chairman who is driven by uncommon initiatives and creativity.

In a statement signed by his spokesman, Prince Kassim Afegbua, IBB said he gets frightened by the monetary consideration that is likely to dictate who emerges the national chairman of the PDP rather than what the people truly want.

He stated: “The discussion is more on the side of heavy monetization of the process and ultimate ‘procurement’ of the position of the chairman by the highest bidder.

“This approach, in my humble view, defeats the whole essence of participation, free choice and voting which are the essential attributes of any democracy without inducement and outright manipulation”.

The former military president said, as one of the founding fathers and stakeholders of the PDP, they needed to collectively assure Nigerians and teeming members that they have indeed learnt their bitter lessons.

His words: “Following the defeat of the party in the 2015 election, it is incumbent upon us as leaders and stakeholders to use the opportunity of the convention to sober reflect on the challenges confronting us, identify our flaws and seek plausible ways to correct them in order to come out stronger in subsequent elections.

“An elective convention presents as it were, a rare opportunity and veritable platform to elect in a holistic manner a credible, tested, down-to-earth and truly urbane candidate with enough stamina, distinguished character and national acceptability who is driven by incurable optimism and passion for a united Nigeria.

“At this point of our political history as a party, we need a National Chairman who is driven by uncommon initiatives, creativity in ideas and a rich content of character to lead and stabilize the party in line with the laudable ideals of the founding fathers of the party. Such an individual must possess national recognition to be able to galvanize political opportunities and transform them into tangible outcomes in our democratic engagements”. 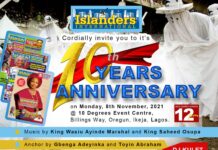