The Director General of the Nigeria Export Promotion Council(NEPC), Mr Segun Awolowo has desribed the Ooni of Ife, Ooni Adeyeye Enitan Ogunwusi, Ojaja II as a unique African traditional ruler with giant srides, commending him for positively shocasing Nigeria and Africa to the world.

The NEPC boss made this assertion in his Abuja office recently while playing host to a delegation from Ooni Ogunwus which was led by the Asoya of Ile Isoya in Osun state, Oba Muraina Adedini in respect of the maidden edition of TellAfrica International Arts & Craft Festival(TIAF) slated for June this year in Baltimore MD, USA and Dublin in Republic of Ireland.

“Kabiyesi Ooni, being a foremost African monarch has undoubtedly lived above espections going by his giant strides especially in Agriculture, youth empowerment and cultural tourism. He is indeed a great ambassador of our culture who has been positively showcasing Nigeria and Africa to the global community.” Awolowo said

While pointing out the benefits in agriculture, Mr Awolowo urged relevant stakeholders to uphold it and make it the mainstay of the economy. He also mentioned processing of agricultural produce like cashew and cocoa among others, which he said would be better than sending raw goods abroad.

On tourism, Awolowo revealed plans to link TellAfrica up with National Council of Art & Culture(NCAC) for possible collaboration as part of measures to ensure a successful TIAF events as scheduled.

Leader of the Ooni’s team, Oba Muraina Adedini thanked Mr Segun Awolowo and his NEPC team for the honour and respect with which the Oonis delegation was warmly recieved. He said the contributions of the Ooni Ogunwusi towards the development of agriculture and tourism are unprecedented which have always been supported by the Federal Government.

While seeking unflinching support of the NEPC on the forthcoming Art & Craft festival and other international programmes of Ooni Ogunwusi, he stated that the collaboration Between the House of Oduduwa/TellAfrica and NEPC will make huge impact on the Nigerian Art and cultural tourism sector.

Ooni’s director of media and public affairs, Comrade Moses Olafare had earlier while introducing the Ooni’s team told the NEPC that Ooni Ogunwusi has adopted Agriculture and tourism as greatest potentials for developing the Nigerian youths, adding that productively utilizing the both sectors will immensely lead to an immeasurable economic properity.

Olafare enumerated how NEPC and the House of Oduduwa are in tandem, particularly through the exportation of non oil products and promotion of tourism in the country through cultural festivals like TIAF.

The maidden edition of the Ooni’s TellAfrica International Art and Craft Festival(TIAF 2019) is billed to hold in Baltimore USA from 13th to 16th and in Dublin, Ireland from 24th to 30th, June 2019.

Another Shot in The Arm For Adeduntan as FirstBank Wins Global... 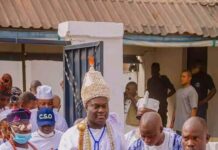