The winner of the gubernatorial election in Bayelsa, David Lyon, on Tuesday, November 19, met with the national leader of the All Progressives Congress (APC), Asiwaju Bola Ahmed Tinubu.

In the election that was conducted by the Independent National Electoral Commission (INEC) Lyon floored his rival, Senator Douye Diri of the Peoples Democratic Party (PDP) with 352,552 votes.
In a statement issued by his media aide, Tunde Rahman, the former governor of Lagos state, also extended congratulations to the national chairman of the party, Adams Oshiomhole, Kogi and Bayelsa state chairmen and other leaders in the two states on this twin-victory.
Hours after INEC declared Lyon the winner of Saturday, November 16, governorship election in Bayelsa state, he had been received by President Muhammadu Buhari in Aso Rock.
Report had it that the president is currently meeting with Lyon and some leaders of the party behind closed doors in Abuja.
sharing is Caring... Please Share 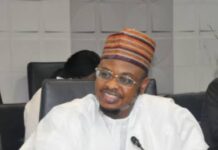