Biodun Fatoyinbo, senior pastor at the Commonwealth of Zion Assembly (COZA), has surrendered to the Nigeria Police for questioning over rape allegations levelled against him by Busola Dakolo.

It was gathered that Fatoyinbo’s protocol team was sent out of the Force Criminal Investigation Division (FCID) headquarters in Abuja.
Fatoyinbo is expected to be at the division for a while because Dakolo’s questioning was said to have taken about eight hours.
In a June interview, Dakolo who is a celebrity photographer had accused Fatoyibo of raping her when she was a teenager.
The pastor denied the allegations and subsequently refused to appear before the panel set up by the Pentecostal Fellowship of Nigeria (PFN) to investigate the claim.
In a statement by Ademola Adetuberu, his spokesperson, Fatoyinbo said his legal team advised against appearing before the panel because the sitting might be partial.
“The legal advice was also premised on the press statement issued and personally signed by the PFN President, Bishop Felix Omobude, where our Pastor was publicly disowned. Based on the foregoing, we are convinced beyond a reasonable doubt that the PFN was already prejudiced and may not conduct an impartial session,” the statement read.
“According to the report, Rev. Omobude, whom we hold in high esteem, went further to crucify our Pastor without seeking to know his side of the story on the matter. With all due respect, we consider this a prejudicial position in dispensing justice and fairness.”
There were protests at the church’s branches in Lagos and Abuja after the allegations were made.
Fatoyinbo also stepped aside as the senior pastor of the church for investigations to be carried out, however, he has since returned to the altar.
sharing is Caring... Please Share 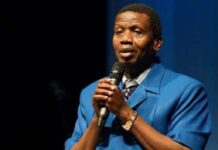 It’s High Temptation For A Governor Earning $24,000 To Preside Over...