Following a thorough tour of liberated communities in the North-East, the Coalition for Human Rights and Rights Monitoring Group has praised the Nigerian Army for restoring peace to the region.

The group, consisting of 10 civil society organisations revealed in a press conference on Monday that it undertook a 10-day assessment to gather first-hand information on the state of affairs in the region.

In a statement signed by President Gabriel Agidi, the Coalition reckoned that the country has made tremendous progress in the fight against terrorism.

As part of it its numerous observations, the civil rights group hailed the introduction of the Super Camp Strategy, describing it as “a massive success”.

The group further acknowledged that the gallant troops are in high spirits at various locations, welcomed by cheering locals.

The group, however, noted that a lot still needs to be done urgently to ensure that life returns to these liberated areas.

As you all may be aware, a total of 10 civil society organisations undertook a 10-day assessment tour of liberated communities in North-East Nigeria under the auspices of the Coalition for Human Rights and Rights Monitoring Group to gather first-hand information on the state of affairs in the region as well as to understand the operational effectiveness of the Nigerian troops in the theatre of operations.

I must quickly add that the assessment tour was at the behest of the Coalition for Human Rights and Rights Monitoring Group, which became imperative in the light of the avalanche of information making headlines as regards the takeover of some Nigerian territories by Boko Haram/ISWAP terrorist group.

Ladies and Gentlemen, the 10-day assessment tour can be best described as eventful and as well as an eye-opener on critical issues ongoing in North-East Nigeria in the sense that we were confronted with facts that either by commission or omission have not been reported in the various news platforms in the country.

For example, it was such a heart-breaking realization that there is a high population of people still living in IDP camps scattered all over North-East Nigeria due to lack of shelter, and these camps are also lacking in food and essential drugs.

There was also a near-complete breakdown of basic infrastructures in these communities, and it somewhat made access such a herculean task for our team. Nonetheless, we were able to navigate our way through the steep terrain in furtherance of our objective.

I must also add that a lot still has to be done urgently to ensure that life returns to these liberated communities in the shortest of times as if this is not done, there is a tendency for the locals to constitute themselves into a security threat just out of frustration.

This, in our considered opinion could account for how and why some of the International NGOs in operation in these communities could easily lure the locals with monetary incentives to state what it’s not on camera and video just in return for a plate of porridge.

We were also confronted with the realization that one of the strategies deployed by the Boko Haram/ISWAP terrorist group is to pose as IDPs and infiltrate these camps to gather information and also recruit fighters with a promise of a better life outside the camps.

As difficult and sad as this might sound, there is a high tendency that some of the International NGOs in operation in North-East Nigeria, also serve as recruitment agents for the Boko Haram/ISWAP terrorist group. This is one area we strongly feel the relevant authorities must act fast if its desirous of bringing to an end the Boko Haram/ISWAP crisis in North-East Nigeria.

It was also observed that the Nigerian troops in battle remained committed and focused on bringing to an end the war in the region, we gathered this much upon interaction with military commanders, lieutenants, and soldiers. As a fact, they all exhibited an infectious loyalty to the country.

This in our considered opinion buttresses the point that in a matter of time, the Boko Haram/ISWAP menace would be a thing of the past, but only if this momentum is maintained vis-à-vis increased and improved welfare packages for those in the battlefield.

We believe that this aspect is very crucial, given the fact that the relevant authorities would not want a situation where soldiers are offered monetary incentives in return for strategic information on military operations.

Nonetheless, we encountered troops in high spirits at various locations as we transverse the nook and crannies of liberated communities in North-East, Nigeria. To our amazement, we were welcomed with songs and comical military displays. There was no sign of fatigue. The atmosphere was joyous, and the morale high. Whatever it is that the military authorities are doing to keep the confidence of the troops high must be continued and improved upon.

We must not also shy away from stating that fact there were also some challenges as evident on periodic ambushes, which according to information gathered, is a result of locals and some unscrupulous NGOs selling out sensitive information to Boko Haram/ISWAP terrorist.

This is despite the existence of the Super Camp Strategy as introduced recently, which in our opinion, is a massive success as it has to a large extent, restricted and limited the Boko Haram/ISWAP offensive. We commend this initiative and encourage the military authorities to do all within its powers to strengthen and consolidate on the continued implementation of the Super Camp Strategy.

At this juncture, we must add that the Coalition for Human Rights and Rights Monitoring Group, in the course of our tour indeed scheduled a meeting with top commanders that the theatre command in our bid to proffer suggestions on ways the military authorities could address the frosty relations it has with some international NGOs. However, this was not possible due to the sensitivity of their operations, as well as a busy schedule at the time of our visit.

We are, therefore, duty-bound to impress it that the efforts of the Nigerian military in operation in North-East Nigeria is nothing but tremendous. They have stayed awake day and night to ensure that Nigeria is free from the clutches of a ragtag group of individuals whose motive for embracing violence is not only senseless but also despicable.

With what we saw on the ground as regards the efforts of the military, we are more than convinced that North-East Nigeria would in no distant time experience peace and sustainable development.

On behalf of the members of the 10 Civil Society Organisations under the umbrella of Coalition for Human Rights and Rights Monitoring Group that participated in the tour of the liberated communities, we extend our sincere apologies to the Nigerian troops over the despicable activities of some international NGOs and, as well as some local NGOs in operation in the North East.

On this note, we say it’s not Uhuru yet as there is still much work to be done by the relevant authorities towards bringing to an end the menace posed by Boko Haram/ISWAP in Nigeria.

Thank you and God bless the Federal Republic of Nigeria. 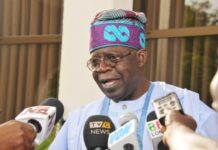