The suspended Chief Justice of Nigeria, Justice Walter Onnoghen, has pleaded not guilty to the six counts of non-declaration of assets at the Code of Conduct Tribunal in Abuja.

He was immediately granted bail on by the tribunal following a short oral application by the counsel, Chief Chris Uche (SAN).
After the bail was granted, Uche also applied to the tribunal to adjourn to a date after the general elections.

The request was granted but a date has yet to be picked as of the time of filing this report.

The CCT chairman ordered the withdrawal of the arrest warrant due to Onnoghen’s ‎voluntary submission to the tribunal on Friday.

But he added that the order of arrest was withdrawn on the condition that the suspended CJN would continue to be present in court throughout the period of his trial.

Before the charges were read to him, the suspended CJN’s lead counsel, Uche, applied to the tribunal to withdraw the arrest warrant issued by the CCT against the defendant earlier on Wednesday.

Ruling on the application, the tribunal chairman, agreed with the defence lawyer. 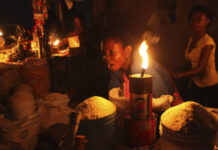 Democracy Day: How To Build Nigeria Of Our Dream – By...