how much does chantix cost in canada cost of bactrim ds without insurance can you buy antibiotics over the counter for ear infection crestor retail price novolog flexpen free trial coupon
25 C
Lagos
Friday, May 14, 2021

Two weeks after President Muhammadu Buhari announced a reduction in the number of foreign trips ministers and other government officials in his regime can embark on, the president will go on a 15-day trip to the United Kingdom.

The president had said the reduction in the number and duration of foreign trips for ministers and other categories of government was a ‘cost-saving measure’ to achieve fiscal prudence.
Buhari also removed travel allowances known as estacode.
He will be in the UK between November 2 and 15, according to Femi Adesina, the Special Adviser to the President on Media and Publicity.
Adesina said, “President Muhammadu Buhari leaves the country today on an official trip to Kingdom of Saudi Arabia to attend Economic Forum of the Future Investment Initiative (FII) in Riyadh.
“On the sidelines of the event, President will hold bilateral talks with His Majesty King Salman and His Majesty King Abdullah ll of Jordan.
“On Wednesday, 30 October, 2019, the President will participate in the High Level Event titled ‘What is next for Africa: How will Investment and Trade Transform the continent into the Next Great Economic Success Story?’ with Presidents of Kenya, Congo-Brazzaville and Burkina Faso.
“At the end of the summit, President Buhari will on Saturday 2 November, 2019, proceed to the United Kingdom on a private visit. He is expected to return to Nigeria on 17 November, 2019.”
Buhari had in April, travelled to the UK on a 10-day private visit.
The president had budgeted N1.75 billion for personal foreign trips for the year 2020 in the proposed 2020 appropriation bill.
sharing is Caring... Please Share

Ali Ndume And His Crocodile Tears On Boko Haram By... 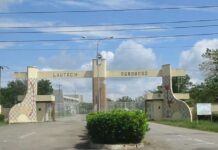