The embattled former National Publicity Secretary of the Peoples Democratic Party (PDP), Chief Olisa Metuh has denied allegation that he entered into a deal with the Federal Government to betray former President Goodluck Jonathan.

In a statement he issued in Abuja, yesterday, Metuh, said it was not true that he surrendered himself to be used to drag the former president down or to impugn on his character and person.The statement titled “I Will Never Connive Against Former President, Dr. Goodluck Jonathan, GCFR”, read: “My attention has been drawn to a release by the Save Ijaw Nation Group wherein they alleged that the order given by the court in my trial was negotiated by me as a means of letting me ‘off the hook’.

“They also stated that I surrendered myself to be used to drag down former president Goodluck Jonathan and impugn on his character and person.“In the light of this and in deference to the former president, I have elected to make these clarifications personally.

“First of all, I state unequivocally that I am completely innocent of the charge against me, and therefore, have no reason to negotiate with anybody to let me off a non-existent hook.“It is therefore inconceivable and completely ridiculous for anybody to think that I would for any reason betray or surrender myself to be used against Goodluck Jonathan, for whom I have immense respect and served diligently, without any apologies, in and out of office.

“To what end will I conspire with the same set of people who singled me out to be humiliated and openly handcuffed while spreading all manner of malicious stories against me, most of which they even denied outright in court while others remain completely unsubstantiated?

“Ordinarily, the content of the charge against me in the Federal High Court should not breed any worries but for the fact that it now appears that the anti-corruption fight has shifted the burden of proof to a defendant once an allegation is made.“On the issue of conniving with the government against former president, Goodluck Jonathan, the Save Ijaw Nation Group may be alarmed by successive media reports that he was ordered to be served on Tuesday with an instruction to appear the following day and subsequently given a five-day time limit; setting off a media frenzy as if the former president is needed for reasons more than a mere request by my lawyers for a corroborative evidence in my case.

“I totally concede that this is not deserving of the status, person and image of the former president, especially with his contribution and sacrifices to national development and sustenance of democracy in our dear country.

“Without prejudice to all the foregoing, I accept that it was the need for corroboration of lack ‘ofmens rea’ on my part that led my lawyers to request for the evidence of the respected former president to assist them in proving my innocence.“However, with all the controversies arising from the reports of the said pronouncements and the attendant concerns thereof, I have instructed my legal team to revisit and review the entire issue of the subpoena.

“In the past 20 months, I have shouldered my travails personally and without seeking to involve any other individual and/or groups in this unfortunate saga.“I harbour no ill-feeling or malice towards none as I believe that with time, justice will surely be done in my matter”.

It would be recalled Justice Okon Abang of the Federal High Court in Abuja had on the strength of an application Metuh filed before him, summoned ex-president Jonathan to appear before the court on October 31.Abang, last Wednesday, gave a bailiff of the court five days to serve Jonathan with a copy of the subpoena issued to compel him to appear as a witness Metuh’s trial.The bailiff was directed to effect personal service of the summons on Jonathan at his Abuja residence.It would be recalled that EFCC is prosecuting Metuh alongside his company, Destra Investment Limited on a seven-count charge.The EFCC alleged that Metuh had before the 2015 presidential election, received N400million from the Office of the National Security Adviser (ONSA), without executing any contract.It said the fund which was released to Metuh and his firm by the erstwhile NSA, Col. Sambo Dasuki (rtd),   was part of about $2.1billion earmarked for the purchase of arms to fight insurgency in the North-East.He was equally accused of money laundering. EFCC alleged that Metuh engaged in an illicit transaction that involved $2million.

Metuh described both Jonathan and Dasuki as very vital and crucial witnesses in the matter. 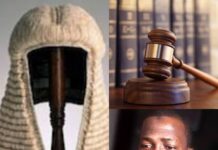