Governor Ayodele Fayose of Ekiti State has been ordered by National Industrial Court of Nigeria to pay over N234m to chairmen and members of statutory commissions appointed by former Governor Kayode Fayemi, but sacked by him.

The court gave the order while delivering judgment in separate suits filed by the sacked members of the commissions against the governor and the Attorney-General of Ekiti State.

Fayose had, on assumption of office in October 2014, sacked the members of the commission who were appointed by his predecessors.

The plaintiffs, through their lawyer, Femi Falana (SAN), approached the court to reverse their unlawful sacking and to order their reinstatement.

They argued that the tenure of their appointment was statutory.

Delivering judgment on Monday, Justice Oyeyibola Oyewumi ordered Fayose to pay the plaintiffs a total sum of N234,010,982.24 for terminating their appointments on October 20, 2014.

Justice Oyewumi held, “It is trite that where an appointment of an employee is terminated outside the specified terms of agreement or specified period, such a termination will be seen as wrongful or unlawful as the case may be.

“It is upon this basis that I find the dissolution of these commissions and removal of their chairmen and members by the first defendant (Fayose) as an act of executive recklessness, executive rascality, a grave disregard for the governor’s Oath of Office, which he sworn to uphold, defend and protect in the constitution of the Federal Republic of Nigeria.

“The action of the first defendant (Fayose) in this case leaves a sour taste in the mouth; a grotesque galore, which cannot and should not be allowed to stand in the way of justice.

“It is noteworthy that it has become fashionable for governors today that when they take over the affairs of a state, the first cause of action is for them to dissolve government boards, both statutory and otherwise, for them to fix into such positions their political gladiators, thereby disregarding/discountenancing the constitutional procedure for doing so. This, to say the least, is most unpatriotic and should not go unsanctioned.

The Judge, however, refused the claimants’ prayers for a perpetual injunction restraining the governor or his agents from forcefully withdrawing the monetised vehicles from them. 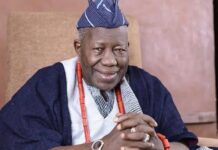 How Primate Ayodele Predicted Death Of Olubadan In His 2022 Prophecies