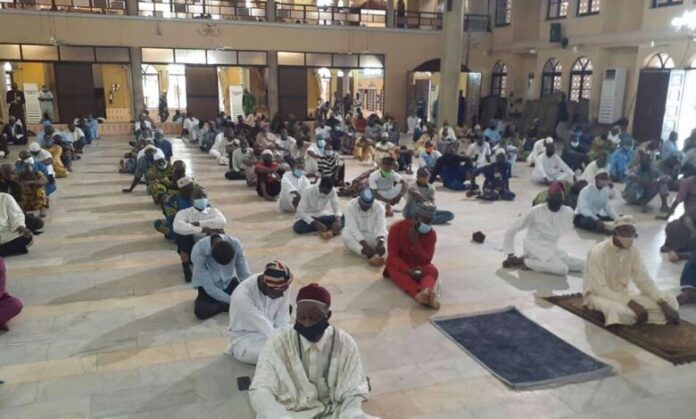 The Lagos State House of Assembly Muslim Community has lifted the suspension on Jumu’a Service in the complex.
The spokesperson for the community’s League of Imams, Mr Adegbite Muktar, made this known in a statement issued in Lagos on Thursday.
The statement said the lifting of the suspension became necessary after the completion of the sanitation exercise in the mosque.
It said that all Muslim brothers and sisters who would be coming for Jumu’a prayers should henceforth adhere strictly to the government guidelines on safety protocols.
“The Muslim Community enjoins all Muslim faithful to follow guidelines by putting on face masks.
“The mosque has provided temperature check points, sanitisers, functional hand wash basins with soap and enough water for ablution.
“Any attendee without a face mask will not be allowed into the mosque,” the statement said.
The Imams, according to the statement, said that the mosque would be opened for Friday’s Jumu’a by 1pm.
The statement said the community commended the efforts of the state government for putting necessary precautionary measures in place to prevent further spread of the deadly virus.
sharing is Caring... Please Share

Information Flying Around On Fresh COVID-19 Lockdown Not True – FG