Controversial Senator, Dino Melaye who represents Kogi West, has committed his life into the custody of President Muhammadu Buhari and the Inspector-General of Police, Ibrahim Idris.

Dino stated this while presenting his motion on the urgent need for the Senate to request from the police details of the 30, 000 police officers deployed to Ekiti state for the Saturday, July 14 governorship election and for the police and Nigerian Security and Civil Defence Corps (NSCDC) to restore his security details

He reminded the Senate Senate that President Buhari owe it a pint of duty to protect the lives and property of every Nigerian regardless of their status.

“I want to announce also to the Senate that while we ask that Nigerians be defended, we also ask that we be defended. I announced that the police withdrew policemen attached to me even before I was arrested. Till date Mr President, I have no single security. I applied to the Civil Defence two months ago, Civil Defence again have been instructed not to provide me with security. As a citizen, not even as a senator, Mr President by his oath of office is to protect me.”

Senator Melaye said Nigerian may have to seek for police support from other African states to be enable to conduct general election if 30, 00 would be deployed to Ekiti alone.

“As a Nigerian, I am appalled that Nigeria Police can provide 30, 00 policemen for a 16 local government state. Then one begins to wonder that to conduct a presidential election, you will need 30, 000 policemen times 36 state plus the FCT. It means we will need 11 million plus policemen. The implication is that we will have to go to other West African states to hire policemen,” he said.

Also Melaye’s first prayer which is requesting for the details of police officers deployed to Ekiti was opposed by Senator representing Zamfara, Kabiru Marafa, on grounds of jurisdiction

“I don’t think we can reduce this chamber to doing police work because what Dino Melaye requested for is entirely the business of the police. From the time we start asking to give us names and numbers of policemen they post to carry out certain responsibilities, I think we have reduced this chamber to the lowest, barest minimum therefore, I oppose this prayer.
After two voice votes, the lawmakers rejected the prayer to request details of officers in Ekiti while endorsing the call to allow Dino Melaye access security.

Building an API in 60 seconds, without any server setup 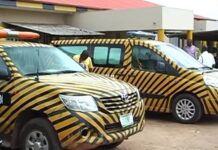