“In politics, the potential for the disastrous rise of misplaced power exists and will persist” Dwight Eisenhower

Now, it is becoming more evident that Nigeria is sustained posture of corruption among the committee of nation around the globe and until holistic measure is been taken to compliment the effort of President Mohammadu Buhari fight against corruption, the nation will continue languishing in poverty and other political crises.

Our organization wishes to state equivocally that the recent fraud discovered at Ekiti State Universal Basic Education is mind boggling that required our unbiased analysis and contribution at this critical period in our nation. We have listened to different version of the story and it is against this background that our organization has taken it upon ourselves to make bold to say that if Dr. Kayode Fayemi (the Executive Governor of Ekiti state) failed to make public what he knows about the said fraud, his integrity and the anti-corruption war of the Mr. President will be in question.

The chief of staff of the state Hon. Biodun Omoleye has been alleged to be the major active player in the said fraud, and various evidences from the commission have clearly shown his involvement in selling over forty contract (40) to a particular contractor at 35% of the contract sum. While we as an organization will not like to tarnish any body image neither do we serve any masters biding to bring any one done, but the fundamental rules of public office holder mentioned in such manner in the past should be strictly follow to show our dear state readiness to fight corruption to a standstill in line with the activities of our President.

We learnt that at different Fora, the Chief of Staff has been bosting that the governor will not do anything no matter what any individual or group is saying about the fraud because he is doing the bidding of Mr. Governor and if Dr. Kayode Fayemi try to sacrifice him the whole world will know what transpired. We see this as attempted attempt by those saying such to blackmail our dear governor but continuous silence will corroborate such assumption. It is important to note that we are going to do Mr. Governor any good if we cannot acquaint him with all these facts as important player in reclamation of our land and restoration of our values.

We hereby demand as follows;
• That the governor should set up a panel to unravel what really transpired at the commission and help EFCC in their ongoing investigation.
• Mr. Governor should as a matter of urgency suspend the Chief of Staff and the chairman of the commission till the end of the investigation in order to pave way for an undiluted investigation. Note the former Secretary to the Federal Government of Federation was replaced by Mr. President because of such fraudulent allegation levied against him.
• Owing to Mr. Governor Position as the Chairman of Governors’ Forum and trusted friend of President Mohammad Buhari, should shows his readiness to help the Federal Government of Nigeria in reclaiming our land.
We hereby made bold to say that any attempt to sweep these allegations under political carpet without proper investigations and protecting the culprits will amount to double standard by the state which is known for integrity among our sisters state, and we are ever ready to back our action with protest if nothing concrete is been done as soon as possible.

Prayer For The Nation: Grace Nation Begins 21 Days Prayer And... 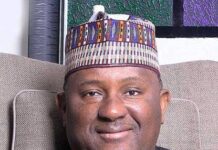 Over 6,806 Nigerians Returned From Libya In 12 Months