Former Lagos State commissioner for Agriculture, Enoch Ajiboso, has been reported to have passed on at the age of 70.

Ajiboso, who had relocated to his hometown in Inisa, Osun State, was said to have died on Sunday night  after he slumped at the town traditional ruler’s palace.
A family source, in an interview with our correspondent, said that Ajiboso, former Chairman of Agege Local Government, was at the palace to resolve differences between parties in Inisa, Odo-Otin Local Government, when the tragedy occurred.
The source, who did not want his name mentioned, added that the deceased was preaching to the parties involved in the differences about death and why they needed to act in accordance with God’s rules.
He narrated that Ajiboso, who was standing at that time, was yet to complete his sermon to the parties when he slumped and was rushed to the hospital for possible resuscitation.
According to him, it was at the hospital that medical officials pronounced him dead and asked that the family be contacted for burial rites.
Another member of the family disclosed that the ex-council chairman’s death was confirmed by the medical officials not to have any link with coronavirus.
She noted that every member of the family has been informed about the former commissioner’s death and that meetings would be held to determine burial rites.
It would be recalled that while serving as Agege council chairman, the former commissioner was elected as Chairman of Local Government Chairmen in Lagos and the National Treasurer of the national body and was later appointed as commissioner between 2007 and 2011, under the administration of Babatunde Fashola.
sharing is Caring... Please Share 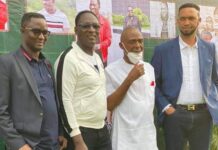 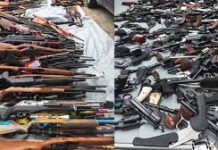 I Have Stolen About 30 Cars In Three Years, Says Armed...