A 29 years old student and a student of Federal College of Education (Technical), become a victim of rape when a fake Islamic cleric told him she would die in 24 hours.

The cleric, Mustapha Hammed has been arrested by the Lagos State Police Command.

The police said the 23-year-old suspect told the victim that he saw a vision that she would die in 24 hours, unless the student took three spiritual baths.

It was gathered that after the victim received the message, Hammed allegedly took the girl to Itowolo in the Ikorodu area of Lagos State for cleansing to avert the death.

While addressing the press during a parade at the state police command on Monday, the Lagos State Commissioner of Police, Edgal Imohimi, said the victim never knew Hammed had a clandestine plan, as he sexually assaulted her.

He also said since Hammed allegedly raped the victim, she had remained traumatised.

Imohimi said, “The Alfa deceived the victim that he saw in a vision that she was going to die within 24 hours. He took the girl to Ikorodu, Lagos, for cleansing so that she will not die.

“At Ikorodu, he raped the girl, who was a virgin.

“He thereafter wiped of her blood with a white handkerchief and since then, according to the victim’s father, the girl has been behaving abnormally because she was completely devastated and traumatised by the incident.”

Hammed confessed that he deflowered the girl when he took her to Itowolo in the Ikorodu area of Lagos State to spiritually cleanse her.

The CP said the case had been transferred to the Gender Section Unit for further investigation, adding that the suspect would be charged to court at the end of investigation. 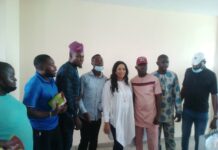