diovan cost at cvs how do i get uti antibiotics without a doctor how much is bactrim at cvs what is the generic name for symbicort lantus canada price what is generic for keflex
27.2 C
Lagos
Saturday, July 31, 2021 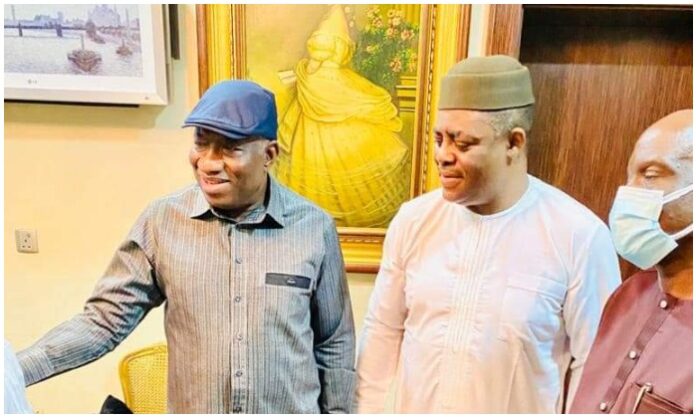 “My team and I had the honour and privilege of spending a wonderful evening with President Goodluck Jonathan in his Abuja home last night. None like him,” the minister tweeted on Wednesday without revealing details of the meeting.
Fani-Kayode’s visit to Jonathan followed his meeting with All Progressives Congress bigwigs including the party’s Caretaker Chairman, Mai Mala Buni; and Kogi State Governor, Yahaya Bello, in Abuja.
After the meeting on Monday, photos of Fani-Kayode, a member of the opposition Peoples Democratic Party, discussing with the APC bigwigs surfaced online.
The development sparked defection reports that the PDP chieftain may be on his way to the ruling APC.
A high ranking member of the APC informed The PUNCH that while it was true that the party leadership has reached out to Fani-Kayode, the former minister had not yet made any commitment.
He said, “Fani-Kayode met with Yahaya Bello and Buni on Sunday for two hours. It is all about politics of 2023 and the recent registration drive of the APC.
‌
“Fani-Kayode has not made any commitment yet but discussions are still ongoing.”
The source also said the APC had begun talks with four PDP governors with the aim of getting them to defect to the ruling party ahead of the 2023 general elections.
However, many members of the APC including Bashir Ahmad, an aide to the President, Major General Muhammadu Buhari (retd.); the Director-General of the Progressives Governors Forum, Salihu Lukman; amongst others have cautioned the APC against admitting the former minister into the party.
Fani-Kayode has been a big critic of the APC and Buhari regime and so many Nigerians were surprised that he could hobnob with two of the highest members of the ruling party.
But the ex-minister, who has been mute on his present political nest, said there was nothing wrong with such meeting intended to discuss the “state of the nation, national issues, party politics and the way forward”.
sharing is Caring... Please Share