atorvastatin how much does it cost where to buy chantix in usa price of lantus yeast infection kill sperm
25.2 C
Lagos
Thursday, June 17, 2021

Femi Adesina, presidential spokesman, says the statement by President Muhammadu Buhari on insecurity in the country was misconstrued.

While playing host to some citizens of Niger state on Monday, the president had said he was taken aback by the new manifestations of insecurity in the north-west.
“I was taken aback by what is happening in the north-west and other parts of the country. During our campaigns, we knew about the Boko Haram. What is coming now is surprising,” Buhari had said.
His comment had sparked a controversy, with Enyinnaya Abaribe, senate minority leader, asking him to resign.
But in a statement on Thursday, Adesina said the president did not say he is unaware of the security challenges in the country.
According to him, what Buhari meant was that he was surprised about the emergence of banditry in the north-west, a region “almost homogeneous, made up of Hausa-Fulani and largely Muslim”.
He added that the president is “fully aware” and “in charge” of the situation.
“The reportage of the statement above was slanted to mean that President Buhari said he was unaware of the security challenges in some parts of the country. Far from it, except to the mischievous mind. The President is fully aware and fully in charge of all that is going on,” Adesina said.
“The statement by the President was clear enough, and these are the salient points:
“In 2015, we knew there was Boko Haram insurgency, particularly in the North-east, and we mentioned it in our campaigns. There are clear economic and cultural factors behind the clashes that sadly rocked many of our communities, be they the Fulani-Tiv or Fulani-Berom conflict, the Tiv versus Jukun and so on. By now, these conflicts are fairly under control.
“By 2019, banditry had surfaced in the North-West. It was surprising, as the area is almost homogeneous, made up of Hausa-Fulanis. The combatants are largely Muslim. This is what the President said he was surprised about.”
Adesina further said that the president’s point was that insecurity in the country is birthed by “evil plan”, not ethnicity or religion.
He warned that deliberate misrepresentation of the president’s words would hurt the country.
“The point he made was that what is happening in the country is not about ethnicity or religion, it is plainly an evil plan against the nation,” he said.
“It is disingenuous that the earlier and latter parts of the statement were downplayed, and the middle part misinterpreted to mean that President Buhari was unaware or surprised by the security situation in the country.
“It is all about our country, and deliberately misrepresenting the President hurts not just the country, but the mischief makers themselves, ultimately.”
sharing is Caring... Please Share 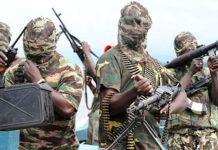 Man Who Raped And Killed University Student In South Africa Gets...