Ayetoro-Itele, a part of Ogun state woke up to the news of catastrophe as a certain Biology School educator was being raped into a coma. The news broke out earlier morning as the man’s acquaintance called the attention of the local police station not far from where the evil act was being committed.

According to an eye bystander, five secondary school girls within the age range of 16-18 walked into the man’s one-room lodgings, they were on mufti, so it was difficult to find out which school they attend but he was certain they were students because they walked in with notes and textbook. He, the eye witness, said he probably thought they came to pay him a quick-recovery visit as the teacher was sick and couldn’t go to school since resumption earlier this week.
These students had presumably timed their coming as there was no one around, everyone had gone to their numerous work stations except this man who happened to be at home based on personal reasons. ” I heard voices from inside his room, although faint because our rooms are far apart. I thought he was merely having some discussion, I heard the moans too but who would think something like that would have happened. I found him naked a few minutes after the girls left as I wanted to check on his state and so I called the attention of the nearest police station.”
The man has been rushed to the nearest hospital and treatment has since begun on him. The doctors and nurses are trying hard to save his life at least, while the police have also begun their investigation in finding out those who committed this evil act.
The police are working in cohorts with the school management and have promised their full support in finding out these rapist students.
Although the school principal has defended that none of his students had partaken of this heinous act but until investigations are completed, no one is innocent yet.
sharing is Caring... Please Share

IGP To Officers: Nigerians Have Lost Trust, Confidence In Us 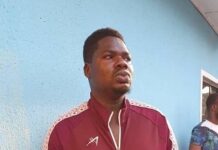