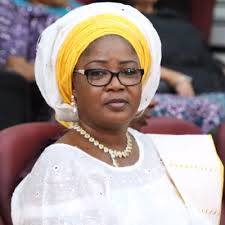 Traders and stakeholders in the Computer Village, Ikeja, Lagos have been warned not to tarnish the image of the Iyaloja General of Nigeria, (Chief) Mrs. Folashade Tinubu-Ojo over a court judgment relating to levy collection in the market.
The Public Relations Officer (PRO) of Computer Village, Ikeja, Lagos, Mr. Godwin Enamoh stated in a release, which was made available to journalists, that Folashade Tinubu-Ojo controls about 500 markets in Lagos and its environs.
The PRO said that Computer Village is not the only market that is under her authority, and that Tinubu has never visited the market to ask for anything, except the only time she came to share palliative to the traders in the market.
“We have about 15 to 20 different Associations under the leadership of ikeja Computer Village Market management.
“If you check properly, only five out of 20 associations are the ones dragging the name of Folashade Tinubu-Ojo in the mud
“Why can’t these agitators face the direct leadership of the market and leave this woman alone.
“It’s obvious that they are being sponsored to attack the father of Folashade Tinubu, Bola Ahmed Tinubu, and whoever is sponsoring them probably has his personal ambition which these five groups probably don’t know,” he said.
Enamoh stressed that putting the story right, the judge never said that members of the market should not pay, but that rather the judge said that if the appointment letter did not permit her to collect such levy, then she could not.
“In this case, the court has not seen the letter of appointment  to ascertain the true position or her power as regards the levy.
“Some aggrieved Computer Village traders  want to use the court verdict to tarnish Folashade Tinubu’s image,” he said.
sharing is Caring... Please Share