-Kaduna state Gov. El Rufai Erstwhile Military Governor of defunct Kaduna State, retired AVM Mukhtar Mohammed is dead. Mohammed died on Sunday night at a hospital in London following a protracted illness . He was 73 years old. A family source , Alhaji Lawal Musa, who confirmed the death to News Agency of Nigeria in Kano, said the remains of the deceased would be flown to Nigeria for burial. The deceased was a one- time Minister of Housing and Urban Development and was a member of the Supreme Military Council . He was also a member to the National Constitutional Conference in 2014 . Mohammed was the Military Governor of Kaduna State from 1978 to 1979 . He was a Chieftain of the Arewa Consultative Forum and also chairman, the board of directors of Freedom Radio, Kano. -NAN ‘How I Rejected Boko Haram’s Offer To Renounce Christ’ — Pastor... 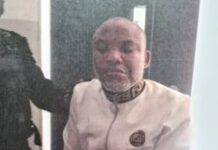