The men were arrested and detained during a search on a train, Indian Express reports.

Government Railway Police Sub-Inspector, Snehangshu Marak, said, “We detained them during a search on the train.
“These four people have got valid Nigerian passports and valid visa to Bangladesh. However, they don’t have any travel papers for their entry in India.”
The official said preliminary investigation suggested that the Nigerians illegally entered the Indian territory through Bangladesh.
Some currency notes, four Nigerian passports and North-East Frontier Railway tickets to Guwahati were recovered from them.
Amtali Sub-Divisional Police Officer, Anirban Das, said the GRP hasn’t yet handed over the detainees to the police.
sharing is Caring... Please Share 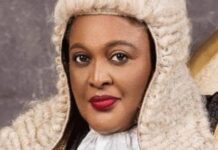 15 Suspects involved In Justice Odili Home Invasion To Be Arraigned...

I Want To Succeed You In 2023, Tinubu Tells Buhari