There’s possibility of witnessing another fuel scarcity just as yuletide is fast approaching.

Senior Staff Association of Nigeria (PENGASSAN) is set to embark on indefinite strike beginning from Monday, following a stalemate in the peace meeting Minister of Petroleum Resources, Mr Emmanuel Kachikwu, brokered between the union and Neconde Energy Limited.

PENGASSAN and Neconde have been embroiled in crisis over allegation of anti-worker practices.PENGASSAN, the umbrella body of senior workers in the oil and gas sector, alleged that management of Neconde wrongly terminated the employment of some of its workers, threatening to go on strike if the sacked workers were not recalled within 72 hours.

The matter caused Kachikwu to initiate a meeting between the two warring bodies in Abuja during the week, but the meeting ended in a deadlock.

In a release signed by PENGASSAN Public Relation Officer, Fortune Obi, PENGASSAN said it would embark on industrial action on Monday.

Obi said: “Following the failure of Minister of Petroleum Resources, Kachikwu, to settle the rift between this body (PENGASSAN) and Neconde, the management of PENGASSAN has agreed to start the strike on Monday night (December 18th, 2017).

“Prior to the strike, PENGASSAN will hold an emergency Central Working  Committee (CWC) meeting on Monday morning, which will be followed with announcement of strike on the night of Monday.’’

The union said it has put its workers across the country on standby for the strike, adding that nothing whatsoever would stop the body from starting the strike by midnight on Monday.

PENGASSAN’s Lagos Zonal Chairman, Mr Abel Agarin, had in a communiqué said it would not tolerate any act of victimization against any of its members.

He said the union’s position was that the termination of employment of some workers by Neconde was unlawful, as it was not in line with equity, good conscience and industrial relations best practices and extant labour laws.

-Additional report from The Nation

PHOTOS: OzzyBee And Fans Takes Over Lagos As WonderKid Reaches Out... 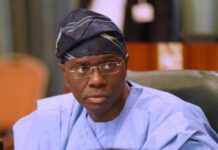