Over their  unpaid  pensions arrears, aggressived Abia State pensioners have taken their protest to the State House of Assembly, lamenting that they have been traumatized and dehumanized by the state government.

-Abia pensioners during the protest

The pensioners have therefore called on the lawmakers to intervene in their matter, saying that pensioners in the state are dying on daily basis as they could no longer afford their medication.

A forthright ago, the pensioners took their protest to the Government House, Umuahia, where the Principal Secretary to Governor Okezie Ikpeazu, Mr. Emma Nwabuko assured them that the Government was making efforts to pay them.

Dressed in black attire, the pensioners, some of them looking malnourished and sickly, took off from the Sub-Treasury on Bande/School Road, did the over four kilometers distance to the House of Assembly on foot where they were received by the Speaker, Rt. Hon. Chikwendu Kalu with some principal officers of the House.

Narrating their ordeal to the law makers, their spokesman, Chief Emmanuel Okparanta, lamented that the State Government has dehumanized, traumatized and abandoned pensioners, saying that the pensioners had only received one month pension since this year.

Okparanta also informed the law makers that, retired workers in the State were last paid gratuity 18 years ago, which he said has added to suffering of the pensioners.

They accused Governor Okezie Ikpeazu of not showing genuine concern and interest in the welfare of pensioners in the State.

Okparanta said that Ikpeazu has not taken any serious practical steps to address their issue in spite of previous assurances from him during a meeting with him on September 25, 2017.

“We met the Governor at Okpara auditorium and he promised to bridge the gap between us and workers but since then he has done nothing”,

Okparanta lamented, adding that one of them who took part in their November 15 protest had died out of stress.

According to him, a lot of the pensioners no longer cope with life due to inability to buy their routine drugs.

He also regretted that dome pensioners in the State still receive as little as N500, N1000, and N2500 as their monthly pension.

“Please tell the Governor to pay us at least for six months because there is money in the state. Anybody saying there is no money in Abia State now should come let us tell him that we know how money comes into the state and its movements”, Okparanta told the law makers.

Responding, the Speaker commended the pensioners for comporting themselves peacefully, and said that he sympathized with them and assured them that their grievances, a copy of which was handed over to him, would be treated as a matter of public urgency.

The Speaker decried a situation where some pensioners still receive N500 as pension, and promised that the House would initiate actions towards “righting the wrong”.

“It is ridiculous to pay somebody N500 as pension. Anybody who is disregarding old age, what he is saying is that he wouldn’t be old”, the Speaker said.

We Won’t Release You To Nigeria For AFCON — Al Shabab... 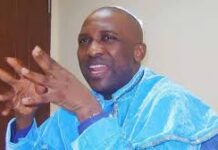 Father Cut Daughter’s Leg With Cutlass For Staying Out Late