There was pandemonium in the early hours of Sunday on Freedom Street in the Ebute Meta area of Lagos State as hoodlums stormed the area, burgled shops and vandalised several vehicles.

It was gathered that the hoodlums, numbering about 100, were returning from a party around 2am when they attacked the community.
PUNCH Metro gathered that the hoodlums vandalised about 10 vehicles parked on the street and looted five shops.
A resident of the area, Mukaila Aromashodun, told PUNCH Metro that when police personnel from the Denton Police Station were called while the attack was going on, they said there was no fuel in their patrol vehicle.
He stated, “Some hoodlums, numbering about 100, came to attack our community around 3am, broke into some shops and looted the goods there and destroyed over 10 vehicles.
“They operated for more than one hour till we mobilised ourselves to fight back, but they injured about five boys from our area, because they were armed and they later ran to the Oko-Baba area. We were able to recognise two out of the hoodlums.
“When we called the police from the Denton Police Station, while the hoodlums were still operating, we were told that there was no fuel in their patrol vehicle, but they later came this morning after the boys had gone, but we did not attend to them.”
One of the shop owners, Lauretta Anya, told our correspondent that the hoodlums stole all the clothes in her shop.
She said, “I was called on the phone around 5am that hoodlums had broken into my shop; so, I rushed down to the area to see what had happened and I saw that all the goods in my shop had been stolen. I just bought goods to sell for the festive period, but the hoodlums stole everything.
“When I got to my shop, I was told that it was the hoodlums, who used to stay at the junction, who perpetrated this act. I don’t know what to do; I have been crying since because I do not know where to start from. I want the government to come to our aid. I learnt that when the police were called, they said they did not have fuel to come, only to show up this morning.”
Another shop owner, Omobolanle Oyebola, who is a student of the University of Lagos, told our correspondent that she just opened the shop to support her education.
She said, “I was called this afternoon, while sitting my exams, that I should come because my shop had been looted. I had to run from school to the shop and I saw that everything in the shop had been looted, including my refrigerator. I just stocked the shop with goods.”
Another shop owner and resident of the area, Titilayo Aromashodun, said, “We were asleep when we heard the hoodlums using machetes to scratch the ground around 2am; we started hearing some people shouting ‘thieves’ and did not know that it was the guys saying that. Later, we saw them destroying so many things; they started breaking into shops and looting everything inside them.
“This would be the third time the hoodlums would be attacking the community; we have reported to the Baale of Oyingbo and he came here this morning (Sunday) to see what happened. I sell assorted drinks, including wines; the hoodlums stole everything in my shop. I cannot estimate what they took away. They were so patient while looting the shops and when we called the police, they told us that they did not have fuel in their vehicle.”
Reacting to the incident, the state Police Public Relations Officer, Bala Elkana, told our correspondent that the police responded to the residents’ distress call, adding that two suspects had been arrested.
He said, “There was a distress call and the police responded; two suspects were arrested, Bashir Abdulazeez, 22, and Oladimeji Aliyu, 25. Two stolen phones were recovered from them and they are helping the police with the names of other members of their gang.
“There is an ongoing operation to pick other members of the gang and the Commissioner of Police has also responded by sending the special strike force he has formed to go to the Denton Police Station and help them in this regard.”
sharing is Caring... Please Share

Serena Williams Moves To Round 2 In US Open, Beats Maria... 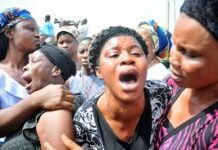 Many feared killed in Benue communities