The wedding of Damilola and her husband, Oluseun, was held earlier in the day at the National Ecumenical Centre, Abuja. The guests thereafter moved to the old Banquet Hall of the Presidential Villa, Abuja, where the reception took place.

Buhari was accompanied to the reception by his wife, Aisha.

State governors, ministers, presidential aides and other top government officials were present at the reception.

According to The Punch, just like the traditional engagement that took place on Thursday, journalists were not allowed to cover any of the two events held on Saturday.

The Vice-President’s media team had earlier in a statement advised that journalists would not be allowed to “record or film the event.”

The office promised to “share information and images — still and video — of the events later in the day.”

“Cameras are however welcome to record the arrival and departure formalities at the church,” the statement added. 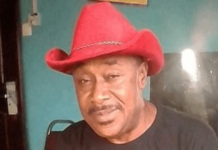 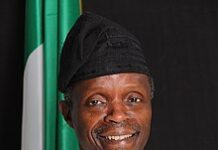