A new twist has surfaced over the story making the rounds about the recent dispute in Olugborogan town in Eti- Osa Lekki Lagos State on Friday, 1st December.

-The jeep allegedly brought for the operation

According to the story in circulation, a prominent and very influential indigene of the community, Aare Bashiru Olawale Fakorede who is popular called Bashy is accused of terrorizing the community with thugs and his influence by being a close ally of Vice President Yemi Osinbajo.﻿

On the said day, suspected criminals we gathered invaded the community and shoots sporadically ordering everyone to relocate.

According to the source, information was immediately sent to the Police Force Headquarter of an intended attack by some people on the community, the Special Anti Robbery Squad (SARS) from Abuja effect the apprehension of the 3 suspected criminals  (Morufu Kowope,Afisu, John Sadauna ) and 3 Pump Action Guns, a pistol, which they claimed were not licensed, Police ID Card and a Vehicle with designated plate number “SPECIAL ” which they normally use for operation were recovered from them.

However, the arrested suspects we were told started threatening the police officers and residents that they will be back within two  hours and that they have the backing and support of one Bashiru Olawale Fakorede who claimed to be a very Good friend of Vice President  Yemi Osinbajo .

Leader of the community, Oba Tijani Akinloye of Ajiran who was also noted to be behind the heinous crime we learnt vowed to bring the suspects back home from Abuja after they have been arrested and taken to Abuja.

After much accusations and counter accusation on the person of Aare Bashiru, who seems to be the bone of contention, we embarked on an investigative mission into Ajah where we met Bashy who gave his own side of the story.

Aare Bashiru Fakorede however faulted the accusations, claiming they are unfounded.

“How can i do that? I really don’t know what they want to gain fabricating this kind of story. I can tell you, all those accusations are unfounded. You can ask about me in this community, I’ve been a peace lover and a peace ambassador. I don’t make trouble, most of those accusing me of terrorizing the community are just like brothers who came around me at their will, We’ve never had any reason to argue not to talk of fight. How come they are now pointing accusing fingers at me for something I knew nothing about?” Bashy lamented.

“Moreover, I can’t denied knowing the arrested suspects, they are just like brothers too. In fact I can’t remember the last time we spoke on phone not to talk of calling them to attack people, one thing I know is that they are not criminals. It’s just unfortunate that the accusers are not sincere with their claims, these people (accusers) are very fond of encroaching into people’s properties. They did it to me once over a 6 Plots of land I had in that area, I sold the land to another person and before you know it, they have taken part of it. When I visited the place, I met them and warned them not to go beyond their boundary and jokingly we ended it without hard feelings.”

The questkon of how his name came up as the one instigating violence, the unassuming gentle businessman said;

” Just like I said earlier, I know all of them, the accused and the accusers, we are all kinsmen, the two guys accused are also known to them, those guys are hunters who move around bush paths to set traps for animals. So it’s now confusing now that they were held for thuggery.”

” In fact, on that said day, I was not in Lagos. I was in Osun State with my wife for a function, and just when I got a call from the Investigating Police Officer (IPO) I told him I was not in Lagos and just when I came back on Sunday I made myself available, the policeman whose ID card was found on them was arrested for stealing, we caught him alongside some indigenes perpetrating this act and his Identity Card was taken as an evidence. ” Bashy explained.

Our investigation further revealed that the suspects are not criminals in anyway.

Oba Tijani Akinloye of Ajiran, the traditional ruler of Olugborogan community while speaking with us on phone further shed more light.

“There was no sporadic shooting as claimed by the accusers, those guys were just painting a false picture of what happened. I was at Zone 2 yesterday, and this exactly I told them.” He explained

“Aare is a peace loving follow, as a community leader, I need balance whatever is happening, not to add into the situation, we are one family and shouldn’t engage one another in battles just for selfish interests.” Baale Concluded 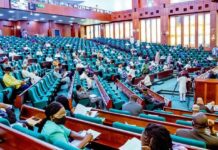 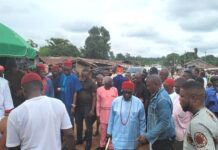 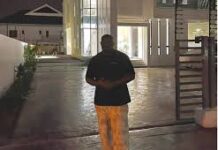