Former military President, General Ibrahim Babangida, has called for an end to the violence and bloodshed that has roiled the country in recent weeks, saying that too many innocent souls have been lost through too many avoidable crises.

“We have witnessed so much bloodshed through communal clashes and conflicts that [we] need urgent action to stop them now,” the ex-President admonished.

Babangida stated this in Minna in a statement he personally signed to mark the Armed Forces Remembrance Day celebration, pointing out that “we should cooperate and supports our security with relevant information and intelligence to help in tackling the problems.”

He mentioned that at a time when the country is faced with the many challenges of terrorism, communal clashes, kidnappings, ritual murders and other forms of organised violent crimes, Nigerians should inculcate the cultural values that promote good conduct, tolerance and peaceful coexistence.

“We should eschew hate speech, discrimination and other vices that trigger senseless violence and bloodshed,” the general said.

He called on the government at every level, religious leaders, traditional rulers, social activists and the media to serve as national vanguards in resolving some of the recent disturbances threatening national security.

The former President used the opportunity to urge politicians from all parties to be conscious of their campaign slogans and messages by ensuring that they are geared towards peaceful participation and constructive engagement of the electorates. 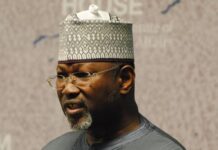