Former military president, General Ibrahim Babangida (IBB) has concluded plans to establish a scholarship programme at all levels of the Nigerian school system in memory of his late wife, Maryam Babangida.

He made the disclosure in his address at the Inaugural Annual Memorial Lecture in honour of the former first lady, who died from Ovarian cancer on December 27, 2009, in California, USA.

Babangida, who was represented by Chief Emmanuel Eboh, poured encomiums on late Maryam, who he described as a faithful wife, role model and supportive partner dedicated to the emancipation of Nigerian women.

He said Maryam worked with passion and commitment towards alleviating the poor living condition of Nigerian families, through her pet project, the ‘Better Life for Rural Women’, which  she initiated to empower the women.

According to him, the late Maryam made her mark in her lifetime and would ever be remembered as a good wife, sweet mother and role model by the Babangida family and the Nigerian women.

“The late Maryam Babangida, whom we are honouring today was a great woman of value. She was a supportive wife, a caring mother and a role model who brought out the true colour of the Nigerian woman.

“She was a woman of colours in every aspect of her life. It is in view of her contribution to the emancipation of the Nigerian woman, that as a family, we want this annual event to embody scholarship awards.

“The scholarship award programme will be part of our contribution to the preservation of the memory of this great Nigerian woman. The scholarship will cut across all levels of the Nigerian school system,” Babangida said.

Earlier, Chief Leo Okogwu, late Maryam’s elder brother and the convener of the inaugural Lecture, eulogised the late first lady for her efforts in advocacy for a better life for Nigerian families.

He said the Better Life programme for rural women initiated by the late Maryam Babangida was an innovation that lifted the prestige of Nigerian women and also empowered them to live an improved life.

Okogwu listed the likes of late Margaret Ekpo and Mrs Funmilayo Ransome-Kuti, as some of the prominent women leaders and activists who did so much for the promotion of women empowerment in the Nigerian society.

“The late Margaret Ekpo and Mrs. Ransome-Kuti’s memories appear to have disappeared with ever-retreating horizon as they question the gratitude of Nigerians for the bravery of these departed golden women,” Okogwu noted.

He, however, appealed to Nigerians not to allow the memory of late Maryam Babangida waste away, but rather continue to eulogise and appreciate the efforts and contributions of the late former first lady in nation-building.

In an address, the acting Governor of Delta, Mr Kingsley Otuaro described the late Maryam as a trail blazer, who despite the economic challenges, worked tirelessly to improve the lots of the Nigerian woman.

The acting governor, who was represented by the State Commissioner for Information, Mr Patrick Ukah, said Delta was proud of the achievement of the late first lady for her initiative in giving rural women a better life.

“The late Maryam Babangida, of whom we are all gathered here to honour, is a Delta woman of whom all of us are really proud of. She was a supportive wife and a role model to the Nigeria woman,” Otuaro said.

In a lecture, the guest speaker, DrFati Ibrahim said the late Maryam Babangida was a resourceful woman, who supported her husband and brought great exposure to the women folks through her better life programme.

“An African woman participating effectively and fully integrated into the process of national development and engaged in the promotion of family values,” she said.

Ibrahim, a political activist and internationally acclaimed goodwill and fashion ambassador, explained that the better life initiative of the late former first lady was set up with the aim of improving the standard of living and the quality of life of the rural populace.

According to her, the focus of the poverty alleviation programme is on rural women, with the aim of integrating them into national development by creating awareness in the general public to the plight of the ordinary women.

The News Agency of Nigeria (NAN) reports that the theme of the inaugural lecture is, ‘The Nigeria Woman, Before, During and After the Better Life for Rural Women: A Salute to Maryam Babangida.

High points of the event include a cultural dance play by the Organisation for the Advancement of Anioma Culture (OFAAC) and a play let, presented by the Theatre Arts Department, State College of Education, Agbor. 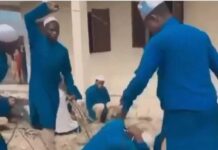