Once a woman has children for her husband and had married him before a house was built, she has the right to live in the house with her children even after divorce under the provisions of the Married Woman Property Act 1882, a court held recently in Ibadan, Oyo State. 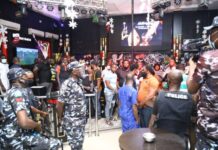