cost of lisinopril 40 mg what is the best over the counter how much does 200 units of botox cost bactrim dosage for strep throat medications that treat chlamydia zoloft cost walmart
25.2 C
Lagos
Friday, August 6, 2021

The 26 year-old gave the advice at Enugu State Police Command, yesterday, where he was paraded for alleged rape, threatening violence and invocation of Juju.
State Police Commissioner, Ahmed Abdurrahman said the pastor was arrested by operatives of Operation Puff Adder after he allegedly raped a female member of his church whom he lured to his house under the pretence of organising a crusade.
According to CP Ahmed, “The pastor on November 9, 2019, invited Miss Ukwueze Ifebuche Blessing with a pretence of having a crusade programme on that faithful day by 6pm and instructed her while coming, to come with a picture of her sick little brother for prayers.
“On her arrival, the pastor took her to his house and left with the pretence to go and bring other people who were supposed to come for the programme but returned at about 11pm and dragged her to his room, brought out a magical stone and threatened to kill her if she raised alarm.
“He ordered her to remove her clothes, she refused and her refusal was followed with a hot slap. The pastor forcefully tore her clothes and raped her.
“He seized her pant, brazier and brought small bottle and wanted to insert it into her private part, she struggled and ran towards the door naked while shouting and this attracted the neighbours who came and invited the police who rescued her and subsequently, arrested the pastor.”
The pastor who claimed he was swindled by a native doctor he approached in Kogi state for spiritual powers, after collecting N200,000 from him, agreed to raping the lady on that fateful day.
According to the pastor, “a native doctor I went to gave me the small coffin and a soap and told me that after using the soap to bath, that I will see money in large quantity after seven days but unfortunately for me, after using the items for seven days, I saw nothing and it’s about three months now.”
When asked what he was doing with all the panties and braziers in his possession, Pastor Egbo denied using them for any spiritual exercise.
On the use of ‘remote control’ to hypnotise his victims, he said: “The native doctor gave me an item and instructed I chew seven seeds of alligator pepper and pour on the item wrapped in a red cloth and say whatever I want and it will come to pass.”
Continuing, he advised men and women of God not to seek power from strange sources because it would eventually collapse as his did.
Other items seen in his possession included olive oil, St. Michael perfume, black soap and scent.
Meanwhile, the command also paraded 35 other suspected criminals for various offences.
The police boss said the command further recovered six arms and three live cartridges as well as seven inverter batteries, one tricycle, one lorry and one hand set.
Other items recovered included filling machine, cutting machine and short iron axe, all used in fabricating locally-made guns as well as piles of MTN cables and transmission armoured cables.
sharing is Caring... Please Share 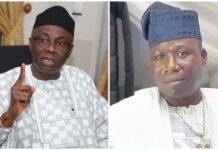