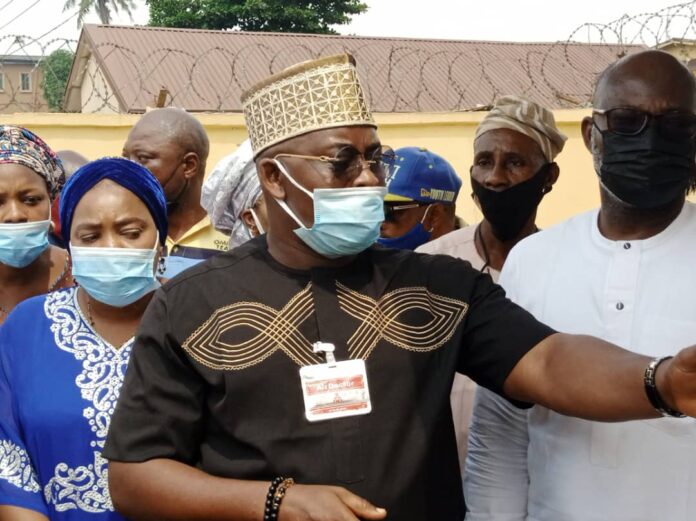 Hon. Olayiwola spoke during the continuation of the committee’s visit to Local Government and LCDAs in the state on Friday, 12th March, 2021.

The Committee Chairman and members of the committee observed that the council chamber lacked proper furniture and ordered the chairman to provide a befitting chamber for the councillors and make provision for a gallery.

The lawmaker stated that the committee embarked on the visit to feel the pulse of the staff and the councils to see what is going on in the various councils and chart the way forward.

Olayiwola however, commended the chairmen of the three councils visited during the tour; Lagos Island LG, Lagos Island East LCDA and Ikoyi/Obalende for bonding with the staff and politicians in the councils.

“Well appreciate the relationship between the management and the councillors and for taking care of the workers.

“We are here to see some of the projects the councils have done, the ones they have completed and the ones that have not been completed

“It has been a busy and hectic day, but we thank God that we went to three local government and LCDAs today.

“We went to Lagos Island, Lagos island East LCDA and Ikoyi/Obalende LCDA. We are satisfied with Labour/Management Relationship in the councils. It is very cordial and we are happy as we were informed that what exists between labour and management in the councils is congenial.

“The councils have really worked hard and it showed that the dividends of democracy is being felt by the people because we visited some project sites in the councils. The various works they are doing in the local governments are encouraging,” he said.

In his response, the Chairman of Lagos Island Local Government, Hon. Tijani Adetoyese Olusi said that the visit would encourage the council chairmen to do their work.

Tijani stressed that his government has given the people of the area the dividends of democracy and gave an instance of Aroloya Street that was tarred in the area.

This was corroborated by the Chairman of Lagos Island East LCDA, Hon. Kamal Olawale Salau-Bashua, who said that the visit would make them to be on their feet and that it was meant for checks and balances, saying that this was what governance was all about.

In his comment, the Chairman of Ikoyi/Obalende LCDA, Hon. Fuad Atanda-Lawal said that what the committee did was an oversight function to see how government funds were being utilized.

“We need this kind of visit for the people to feel the impacts of the government.

“The committee has been to one of our Primary Health Care Centres and they have seen that the local government has done well. We can do more for the people. I want to appreciate the chairman of the committee and the members for visiting our local government, he said.

CAN Commends Zamfara Govt. Over Security During Christmas