The Lagos State House of Assembly on Monday rejected three of the  38 Commissioner and Special Adviser nominees of Governor Babajide Sanwo-Olu after the completion of screening by the ad-hoc committee of the House last week.

The gallery of the Assembly was filled to the brim with well wishers of the nominees on Monday during the confirmation exercise that held at the hallowed chamber of the Assembly.
Those rejected by the Assembly included Ms. Adekemi Ajayi-Bembe, Mr. Obafemi George and Prince Lanre Sanusi.
The Speaker of the Assembly, Rt. Hon. Mudashiru Obasa had said shortly after the final screening of the nominees that the report of the committee set up for the screening would be based on the decision taken at the parliamentary of the assembly.
He added that the confirmation was not about educational qualification, and that the House would continue to monitor the commissioners and special advisers and oversight their responsibilities when they assume office.
He said further that where they discover that the actions of the incoming Commissioners and Special Advisers were inappropriate the House might declare a vote of no confidence on them.
Those cleared for nominations as commissioners and special advisers were Mr Oladele Ajayi, Mr Oluwatoyin Fayinka, Mrs Yetunde Arobieke, Mr Kabiru Abdullahi and Mr Joe Igbokwe.
Others are Mr Bonu Solomon Saanu, Mrs Lola Akande, Prince Anofi Elegushi, Mrs Solape Hammond, Mr Moruf Akinderu-Fatai, Mrs Shulamite Adebolu, Mr Tokunbo Wahab, Mr. Rabiu Olowo Onaolapo, Mrs. Folashade Adefisayo, Professor Akin Abayomi, Dr. Idris Salako, Mr. Tunji Bello, Mr. Gbenga Omotoso, Mrs. Toke Benson-Awoyinka and Mrs. Bolaji Dada
Others included Mr. Lere Odusote, Dr. Frederick Oladeinde, Mr. Gbolahan Lawal, Dr. Wale Ahmed, Mr. Moyo Onigbanjo (SAN), Mr. Hakeem Fahm and Mrs. Ajibola Ponle.
Also confirmed were Engr. Aramide Adeyoye, Mr. Segun Dawodu, Mrs. Uzamat Akinbile-Yusuf, Mr. Sam Egube, Ms Ruth Bisola Olusanya, Princess Aderemi Adebowale, Mr. Tunbosun Alake and Mr. Afolabi Ayantayo.
The rejection and confirmation were done through a voice vote supervised by the Speaker.
However, the swearing-in and inauguration of the cleared nominees has been fixed for Tuesday 20th August, 2019 at the Adeyemi Bero Auditorium in Alausa, Ikeja by 10 am.
sharing is Caring... Please Share 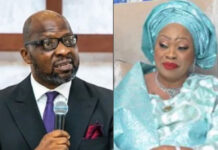