The crisis currently rocking the leadership of Labour Party (LP) entered another level, Tuesday, as one of the factions convened a special convention that saw to the ouster of the party’s erstwhile national chairman, Alhaji Abdulkadir Abdulsalam , and unanimously elected a former Abuja Rotary Club Governor, Tayo Omotosho.

Chronicling the many ‘sins’ of the ousted party chairman, the party’chaise pity national chairman (south) and convention chairman, Comrade Calistus Okafor said the former chairman had contravened various sections of the constitution, embezzled party finances and arrogated undue powers to the office of the chairman as well as forgery.

However, mild drama ensued when the delegates in their hundreds led by the new factional chairman matched to the party’s house premises that the former chairman (Abdulsalam) sneaked out of the building.

Comrade Okafor, in his opening remarks at the convention also lamented that the party under its former chairman, Alh Salam, never held party meetings to agree on the way forward but rather enjoyed administering the party through executive fiat, a situation he said made other NWC members uncomfortable.

Okafor said: “Since 2015, Labour Party has never held meetings, even towns and associations hold meetings regularly. I usually feel ashamed when I watch TV and see the PDP, APC and other parties convening and holding meetings and we have nothing to show.

“Labour Party is supposed to be the mouthpiece of the people in a period when the ruling APC is having crisis of all sorts, PDP is having one corruption case or the other. The Leadership has however rendered our party useless.

“In the biuld up to the 2015 general elections, the party generated a whopping sum of N1,344,047,000 (One Billion three hundred and fourty four million forty seven thousand Naira only) all from the sales of expression of interest forms, nomination form and waivers to aspirants,”

Speaking with newsmen at the party national secretariat shortly after taking over, the new national chairman Rotarian Tayo Omotosho, assured of a new beginning in the Labour Party.

Omotosho promised bring back all the aggrieved members who had left the party due to inefficient leadership style of the former national chairman.

When contacted on phone, the embattled Chairman described the the faction as “inconsequential members of the party” adding that he had officially lodged a report at the police. 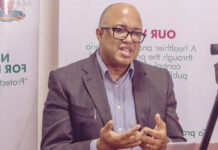