The world is not fair, and it’s so because of so many weird reasons.

A 29-year-old man known as Prince Yeboah Wiredu has reportedly killed himself after his wife made a fool out of him.
According to a report, he found his wife in bed with another man after he struggled to let her joined him in the United States from Ghana two years ago.
The obituary poster of the man which has surfaced online notes he died a week ago, on 11th September 2019.
sharing is Caring... Please Share 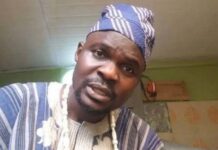