The truth behind the recent incident in Lagos where the exotic G-wagon car beloging to Ekiti State governor, Ayodele Fayose caught fire in a mysterious way has been revealed as the car we gathered was set ablaze by the governor’s ‘enemies.’

The Gov. broke his silence over the fire incident that gutted his car recently in Lagos, claiming that his exotic car was actually set ablaze.

The governor didn’t mention the people that perpetrated such act, but said it was obviously by his ‘enemies’.

Fayose, who spoke on a monthly Radio and Television Programme in Ado-Ekiti, said he would neither be swayed nor distracted by the incident. He also thanked God for saving his life.

“Some people went and set fire on my car. Anyway, I did not want to go into the controversy now. I am leaving everything in the hand of God because where there is life, there is hope. Who says I cannot even buy a better car?” 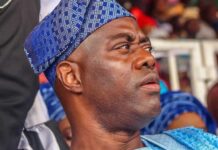 I’m giving out to the less previledged- Gbemi Becks Says As...