Rev King was the eccentric leader of the Christian Praying Assembly, a Lagos-based Pentecostal church who was condemned to death in 2007. It was for the murder of his church member, one Ann Uzor that was burnt beyond recognition by King for allegedly having an illicit affair with another church member. About 12 years ago, as a reporter in Lagos, I had a memorable encounter with Rev King at the Ikoyi Prison in Lagos. This is the story.

In 2007, I was working for National Standard, a Lagos based weekly magazine, and one of my hunting grounds for stories was the Ikoyi Prison, a large penitentiary overflowing with convicts and awaiting trial inmates, who by far were more in numbers than the real jailbirds. At that time, my friend, a jovial but professional officer from Rivers State, Ralph Ekeh was the head-honcho in charge of the Prison. I was fond of visiting Ekeh, an Assistant Comptroller-General of Prison to discuss about his vision for transforming the place. It was Ekeh who first got the Ikoyi Prison registered for WAEC and NECO, and also partnered it with the National Open University of Nigeria (NOUN).
Each time I visited, he took me around, rather proudly showing me the ‘students’ in makeshift classrooms while eagerly informing me of his dream to make the Ikoyi Prison, a centre of excellence in Nigeria. Or sort of.
But apart from these serious and ‘official’ stories, he was also my source for some of my reports about the famous inmates in the prison. Through him, I did a story on the raving mad cannibal Clifford Orji, who was in jail, after he was caught somewhere around Toyota Bus-stop in Oshodi, Lagos, in the middle of butchering and eating a woman alive. The mob that caught him reportedly found remains of human flesh and expensive gadgets, which suggested to them that Orji was a rich ritualist pretending to be mad. But the Orji that I saw in Ikoyi was raving mad and obviously in need of psychiatric care.
My greatest encounter at the Prison, however, was not the mad cannibal Orji, but the very powerful Anambra-born Rev King, who at that time had not been convicted but was on trial for murder. My curiosity about King, whose real name is Chukwuemeka Ezeugo, was first piqued at the prison by his followers who trooped to visit him daily. Each time I was at Ikoyi while waiting to see the Prison boss, I would see scores of the King-led CPA members also waiting to visit their leader. The women often dressed conservatively, while the men were completely bald and had a goatee.
So, one day, I asked my friend, the Prison Boss to set up a meeting for me with King; that I would love to interview him. He did, but not completely. He would only arrange for me to get to the same spot where King was kept but I would be on my own after that, he said. I agreed.
On that fateful day, I joined members of the CPA to troop to the room, close to the prison gate, where Rev King sat in his full majesty to receive guests. Yes, you are right; he was not in any of the prison cells at that time but had a dedicated expansive room all to himself. When we got there, about three other people were already with him, so we, about eight of us, joined the group. But something strange happened almost immediately.
All the new guests, beside me, simply went down on their knees. I was caught off guard. I wanted to blend in with the CPA devotees and gather as much information as I could before I reveal my identity and ask for an interview. Or, if I perceived it not to be necessary to leave and do a story with the information I would gather anonymously. But that act of complete worship to Rev King caught me by surprise. I also quickly went down on my knees. It was too late. There was about 20 seconds difference between me and the true CPA devotees. In addition, my body language was screaming in protest against what I just did.
So, King easily spotted me. ‘’Hey, who are you,’’ he asked. I was caught. I had to come clean. I told him I was a journalist, lying that I had a dream where I was told that he was innocent and that I wanted to interview him to tell his own side of the story. He was very happy with himself, smirked and told his followers, more like worshippers, that he knew I was coming; that no one could have deceived him. This further increased their awe of him. King was indeed a master manipulator who was milking my little misadventure to further validate his position as a god to his members. Eventually, he declined the request for the interview, asking me to go and report his innocence to the world.
King was subsequently convicted of murder and sentenced to death. He appealed the sentence up to The Supreme Court, the court of last resort and lost. He is in Prison in Maiduguri, awaiting the hangman’s noose. Despite his conviction and absence though, his church has grown by leaps and bounds, reportedly from six branches when King was around to about 200 chapters today.
sharing is Caring... Please Share 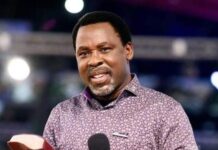