good antibiotics for strep throat how much is flagyl at walgreens medicine for chlamydia over the counter nucynta prices enbrel cost per injection nurx pricing nuvaring
30.2 C
Lagos
Monday, June 21, 2021

Lizzy Evoeme, known as Ovularia in the 80s sitcom, ‘New Masquerade’ has passed away.

Lizzy Evoeme, then played the submissive wife of Chief Zebrudaya (played by Chika Okpala) in the sitcom that also has several characters.
Evoeme’s death was announced on Tuesday by Churchill Ebhodaghe on his twitter handle.
So far no details have been given as regards the cause of her death.
Her death was confirmed by Tony Akposheri, who played the role of Zaccheus, Chief Zebrudaya’s house maid.
‘The New Masquerade’ was a Nigerian sitcom that aired on the Nigerian Television Network during the 1980s until the mid-1990s.
It was created and written by James Iroha, who acted in the sitcom as Giringori Akabogu.
sharing is Caring... Please Share 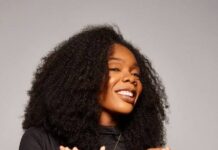